“Mondays with Mary” – The Marian Thought of St. Hilary of Poitiers

Since tomorrow is the feast day of St. Hilary of Poitiers – The Athanasius of the West, I found it fitting to explain his Marian Thought as well as to provide you with an excerpt of his writings of his work, De Trinitate, on ‘Mary in the Economy of Salvation.’ For more on his life and other Doctors of the Church, I encourage you to read my series on them here.

Like most of the Early Church Fathers, St. Hilary had a great devotion and theological understanding to the Blessed Virgin Mary. For Hilary, the reason he sees Mary as the great Mother of Our Lord and the most dominant religious figure in the early Church is because of her glorious virginity. He believes that Mary’s role in Salvation History is unique to her, but always subordinate to the role of Jesus Christ. However, for Hilary, Mary’s role is supremely important for she appears with Christ in the prophesies that speak of the coming of the Messiah in the Old Testament scriptures.

Focusing on Mary’s Virginity, St. Hilary teaches that this experience for the Mother of God as Virgin must have been so inspirational and overpowering that nothing short of her life as a perpetual virgin would suffice. For Mary, there was never any thought that she would enter into the conjugal embrace with her husband. St. Gregory of Nyssa and St. Augustine of Hippo both write on how more than likely Mary took a vow of virginity in the Temple as a young girl.

Mary’s Motherhood, which would be declared dogmatic at the Council of Ephesus in 422, was not a problem for St. Hilary either. He understood well that Mary as Virgin would assist in the work of redemption, but always remaining subordinate to her Son. Hilary knew that the Incarnation of Jesus Christ had an impact on the salvation of humanity. Mary becomes the model of redeemed humanity when she graciously accepts, without reservation, and with unconditional faith, the infinite gift of salvation from God at the Annunciation. 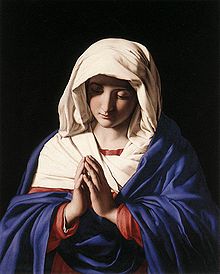 For St. Hilary, defending Mary’s Virginity was at the forefront of his Marian theology because of the other arguments that contradicted this teaching during his lifetime. He understood the importance of Mary’s Virginity – before, during, and after the birth of Christ. Although it would not be declared dogmatic until 649 by Pope St. Martin I, Mary’s Perpetual Virginity was taught, believed, and professed by him and other Early Church Fathers.

Now that you understand St. Hilary’s Marian Thought, let’s take a look at ‘Mary in the Economy of Salvation’ from his document, De Trinitate –

Other witnesses explicitly affirm that the economy of salvation proceeds from the Father’s will. The Virgin, the birth and body [of Christ], and, in turn, the Cross, death, and descent among the dead constitute our salvation. For the Son of God was born of the Virgin and the Holy Spirit for the sake of the human race.

In so doing, he places himself at his own service and, overshadowing the Virgin with his power (that is, with the power of God), he planted the initial seed of his body and set up the beginning of his life in the flesh. In this way, having become man in his birth from the Virgin, he took upon himself the nature of human flesh so that, through this commingling, the body of the whole human race was sanctified in him (italics mine). And as all men have found in him their foundation, through his willingness to assume a bodily nature, so he was restored, in turn, to all men through his invisible existence. Thus the invisible image of God did not refuse the shame of being born in a human manner, passing through conception, birth, crying, cradle, and all the humiliations proper to our nature.

And we, with what worthy gift shall we respond to a love so full of benevolence? Behold the one, only begotten God, whose origin from God is absolutely inexpressible, planted like a seed in the womb of the holy Virgin, developing little by little, taking on the form of a tiny body.

He who contains who things, in whom through whom everything receives existence, behold he comes to light according to the human law of birth. He at whose voice archangels and angels tremble, at whose voice heaven, earth, and all the elements of this world are unraveled, hark, the sound of his newborn wailing! The Invisible and Ungraspable, before whom sight, senses, and touch proclaim their helplessness, wrapped up, in a cradle.

So on this day, let us give praise and thanksgiving for Our Lord Jesus Christ, and the blessing of His Incarnation. Let us joyfully give thanks to our Perpetual Virgin – Mary, the Great Mother of God. And, let us give thanks to the many Early Church Fathers, today, specifically, St. Hilary of Poitiers, who defended both Mary’s Virginity and Christ’s Incarnation with the words inspired by God.

Gambero, Luigi. Mary and the Fathers of the Church. Ignatius Press, 1999.

Tagged as: Early Church Fathers, Mary in the Economy of Salvation, Mary's Virginity, Saint Hilary of Poitiers, The Incarnation of Jesus Christ