“Mondays with Mary” – ‘The Marriage that Linked Joseph to Mary’

On Saturday, I attended the wedding of parishioners I met last year, since they both were in our RCIA and Adult Confirmation process at the parish. Now they are not only parishioners; David and Kristen have become friends who I frequently spend time with when we are all free. I was honored at their request when they asked me to read the First Reading (Tobit 7:6-14) and the Prayers of the Faithful at their Nuptial Mass. The Nuptial Mass was held at the parish and our Pastor was the main celebrant. It was a beautiful wedding made up of close family and friends.

So to honor David and Kristen today, as they began their life together in their sacramental covenant, I want to share a quick reflection on the marriage that linked Joseph to Mary. This comes from the book, Mary for Today, written by Hans Urs Von Balthasar.

Just to clarify for you the section before this one Von Balthasar speaks about the heritage of Israel as a bride to God, which culminated in the prophet Hosea taking a prostitute for his wife to show the people of Israel that what she does to him with other men, they do to God with false gods. Even though this occurred in the Old Testament, marriage was still seen as holy for it would be fulfilled not only on Mary and Joseph, but most complete with Jesus Christ and the Catholic Church. He is the Bridegroom and the Church His Bride.

The section is divided into small sections for easier reading online. Originally it was one paragraph –

“Now perhaps we can understand better the kind of theological significance possessed by the marriage by Joseph and Mary. This marriage is not only necessary so that Mary’s child can count as the descendent of David but also in order to lead toward the fulfillment of the religious sense of Old Testament marriage. Joseph thus brings to completion the two tendencies mentioned above [previous section] but does so while crossing the threshold of the final and definitive covenant. 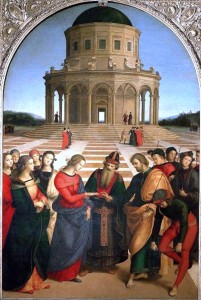 Marriage of the Virgin – Raphael

He brings to completion the fecundity of Abraham, who gave to God all the glory and understood his fruitfulness as a “resurrection from the dead” and thus allowed God to take over. For the husband whose life was centered on marriage this meant a renunciation on the basis of faith and at the same time a sharing in the virginal fruitfulness of his wife. Here Joseph is completely within the field of the New Covenant: physically can seem merely the child’s foster-father, but spiritually he has a very much more profound share in God’s fatherliness by assenting silently to the renunciation demanded by the angel. His hidden virginal fruitfulness should not be forgotten when Mary’s grace is seen its full light.

The marriage that linked Joseph to Mary is a model both for married people and for celibates in Christ’s Church. Admittedly this marriage points predominately backward; it is the completion of marriage as well as of prophetic obedience to Israel. It hardly points forward to the questionable ideal of “Joseph-like marriages.”

As you begin this Monday, pray through the intercession of the Blessed Virgin Mary and St. Joseph for all marriages; that Christ will always be the center and source for the couple’s love and devotion to one another. Pray that the Holy Family will give the grace needed for men and women to defend their marriages against all the attacks of the culture. Pray that marriages may not just reflect Mary and Joseph but Jesus Christ and the Church. Think Ephesians 5!

For further reading today, I would also encourage you to read – “Mondays with Mary” – Mary, Joseph’s Virginal Spouse and Spousal Gift of Self.

Tagged as: Hans Urs Von Balthasar, Marriage in the Catholic Church, marriage of Mary and Joseph, marriage of the virgin, spousal love, the marriage that linked Joseph to Mary