In 1999, Blessed John Paul II wrote the Post-Synodal Apostolic Exhortation Ecclesia in America (The Church in America).  This document was to unite the particular (local dioceses) churches in the America’s – North, Central, and South. It is a call to encounter the living Christ who in turns brings conversion, communion and solidarity to the Church in America. At the heart of this document is the new evangelization. “As I have said…the new and unique situation in which the world and the Church find themselves at the threshold of the Third Millennium…the mission of evangelization today calls for a new program which can be defined overall as a “new evangelization””(Christifideles Laici).

An important component of the new evangelization in America lies with the Virgin of Guadalupe. She is the fundamental piece that helps us all, not only on this continent, but also in all the Church. It is through Mary that we encounter Christ. Mary, as a good and faithful Queen Mother, leads us always to her Son and Our King, Jesus Christ. She never seeks her own glory, but is always pointing to Jesus. When she appeared to St. Juan Diego in 1531, she comes as an Aztec woman who is pregnant with child. That child is Jesus Christ. It is through the power and grace of Christ that the country of Mexico converts to Catholicism for it was Mary who led Mexico and pagan Aztecs to her Son.

How can we fail to emphasize the role which belongs to the Virgin Mary in relation to the pilgrim Church in America journeying toward its encounter with the Lord? Indeed, the Most Blessed Virgin “is linked in a special way to the birth of the Church in the history…of the peoples of America; through Mary they came to encounter the Lord.”

Throughout the continent, from the time of the first evangelization, the presence of the Mother of God has been strongly felt, thanks to the efforts of the missionaries. In their preaching, “the Gospel was proclaimed by presenting the Virgin Mary as its highest realization. From the beginning – invoked as Our Lady of Guadalupe – Mary, by her motherly and merciful figure, was a great sign of the closeness of the Father and of Jesus Christ, with whom she invites us to enter into communion.” 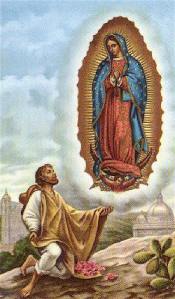 The appearance of Mary to the native Juan Diego on the hill of Tepeyac in 1531 had a decisive effect on evangelization. Its influence greatly overflows the boundaries of Mexico, spreading to the whole continent. America, which historically has been, and still is, a melting pot of peoples, has recognized in the mestiza face of the Virgin Guadalupe is venerated as Queen of all America.

With the passage of time, pastors and faithful alike have grown increasingly conscious of the role of the Virgin Mary in the evangelization of America. In the prayer composed for the Special Assembly for America of the Synod of Bishops, Holy Mary of Guadalupe is invoked as “Patroness of all America and Star of the new evangelization.” In view of this, I welcome with joy the proposal of the Synod Fathers that the feast of Our Lady of Guadalupe, Mother and Evangelizer of America, be celebrated through the continent on December 12. It is my heartfelt hope that she, whose intercession was responsible for strengthening the faith of the first disciples (cf. Jn 2:11), will by her maternal intercession guide the Church in America, obtaining the outpouring of the Holy Spirit, as once did for the early Church (cf. Acts 1:14), so that the new evangelization may yield a splendid flowering of Christian life.

The Virgin of Guadalupe has been important in my own life since I was 17 years old when I visited the shrine in Mexico City. As one who has lived in the Southwestern United States for most my life, I have seen the image of the Virgin of Guadalupe many times. In my high school theology classroom, I have an image of her that is always in a 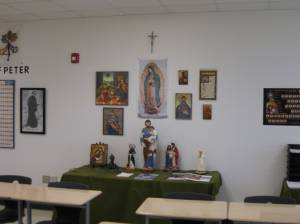 I urge you to learn more about Our Lady of Guadalupe and pray for her intercession during this Fortnight for Freedom (June 21-July 4). She was called upon many times during the Cristeros War in Mexico and I have no doubt she come and aid us as well at this time. 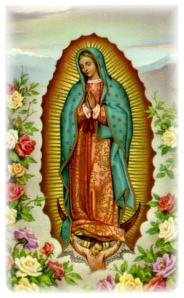