“Mondays with Mary” – The Assumption of the Blessed Virgin Mary

On November 1, 1950, Blessed Pope Pius XII in the Apostolic Constitution, Munificentissiumus Deus, through an ex cathedra (“from the chair” – infallible) statement declared solemn “that the Immaculate Mother of God, the Ever Virgin Mary having completed the course of her earthly life was assumed body and soul into heavenly glory” (44).

In 1946, Pius XII asked the Bishops of the Catholic Church to gather information for the potential dogmatic declaration of this doctrine. Two questions were asked of the Bishops – 1. Is the Assumption definable? & 2. Do you and your flocks desire a definition? The Bishops gave a unanimous affirmation to both questions proposed to them. Over a 95-year period, there were 8 million petitions sent to Rome requesting that the Assumption of the Blessed Virgin Mary be declared a dogma. It’s also an important fact to note that the Council Fathers of Vatican I also requested to make this a dogma. 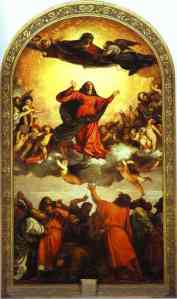 The Assumption in the Sacred Scriptures can be clearly seen in Genesis 3:15 and in the writings of the Apostle to the Gentiles, St. Paul. In Genesis 3:15, Mary shares the same victory over sin and death as does Jesus due to their mutual enmity with Satan and sin. St. Paul tells us (Romans 5-8; Heb 2) the effects of the seed of Satan are sin and death (bodily corruption). Mary, who shares in her Son’s victory over sin and death, is victorious and saved from sin and death. She triumphs over sin through her Immaculate Conception (no bodily corruption) and triumphs over death in her Assumption. “It is worthy of note that many bishops from around the world sent to Pius XII the same scriptural support of Genesis 3:15…thus offering episcopal confirmation that Genesis 3:15 is the primary doctrinal seed in Scripture for Mary’s Assumption” (Introduction to Mary).

Other scriptural references for the Assumption are: Luke 1:28 because Mary is “full of grace.” Being that she was “full of grace”; the effects of sin would not taint her, which would be bodily death. Psalm 132:8 prophecies, “Arise, O Lord, out of your resting place: you and the ark which you have sanctified.” 1 Corinthians 15:23 and Matthew 27:52-53 both give support to a potential bodily assumption. In Revelation 11:19 and 12:1, Mary is the Ark of the Heavenly Jerusalem (she is the New Ark of the Covenant) and she is the woman crowned and the woman assumed.

Catholic Church and Orthodox Church celebrate the “Dormitio” (Dormition – falling asleep) of Mary on August 14. This has been a tradition in the East since the 4th century. The Dormition of Mary commemorates the death, resurrection, and Assumption of Our Lady. In Egypt and Syria, there were liturgies on our Lady by the 5th and 6th centuries. The Church Fathers – St. Germain of Constantinople, St. Andrew of Crete and St. John Damascene all wrote and spoke about the doctrine of the Assumption in the 7th and 8th centuries. By the 13th century, the Assumption of Mary was accepted as a doctrinal teaching.

As you have read in this post, I mention the death of Mary a few times. It has been debated for centuries and is still debated today – Did the Blessed Virgin Mary die? There are two positions on this question – one from the Mortalists and the second from the Immortalists.

First, the Mortalists position is that Mary experienced a temporary separation of soul and body but without bodily corruption. Her soul would have assumed directly into heaven and her body remained on earth for three days [like her Son]. Blessed Pope John Paul II favored this position – “The fact that the Church proclaims Mary free from original sin by a unique divine privilege does not lead to the conclusion that she also received physical immortality. The Mother is not superior to the Son who underwent death, giving it a new meaning and changing it into a means of salvation.” The Eastern Rite of the Church also views this position as the correct one and it coincides with the Dormition of Mary. Personally, I favor this position as well. If Our Lord suffered death, then so did his Mother. Mary suffered death with our Lord as he hung on the cross, but that’s another post for another time.

Second, the Immortalists position is that Mary with body and soul intact was just assumed into heaven. Timothy of Jerusalem does not think Mary died and argues by saying, “Wherefore the Virgin is immortal up to now, because he who dwelt in her, assumed her to the heavenly regions.”

Between the two positions, the position of the Mortalists is the stronger position. Most of the theologians and Doctors of the Church beginning with St. Augustine of Hippo to Venerable John Cardinal Newman conclude that Mary did suffer death, but without bodily corruption. It was not a painful death, as some have claimed that she was martyred (Simeon’s prophecy), but as St. Francis de Sales says, it was a death “due to a transport of love.”

In conclusion, as we celebrate the Assumption of Mary, let us be like our Queen, a disciple for Jesus Christ, always yearning and looking towards the Heavenly Kingdom.

Mary, Mother of God and Ever-Virgin who was Immaculately Conceived, Assumed and now Mediates From Heaven…Pray For Us! 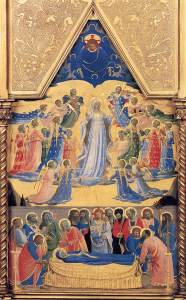