Saint Augustine of Hippo – Bishop, Doctor and Saint of the Church 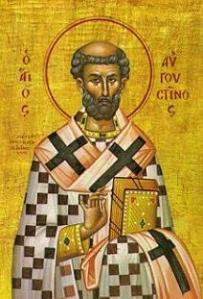 Most people know the great conversion story of Saint Augustine of Hippo, if you don’t, I would encourage you to read his book, The Confessions of St. Augustine. As I write this post, there is also a new film depicting the life of St. Augustine screening in select theatres in the country over the upcoming days. You can help others see this film by viewing the Restless Heart website and promoting the new film being distributed by Ignatius Press.

The first time I read, The Confessions of Saint Augustine, I was an undergraduate in the Saint Ignatius Institute at the University of San Francisco. I remember being so moved by the text that I read it again a few times. It’s his greatest work that should be read at least once in your life. Second only to The Confession, another great work of his, City of God.

Although The Confessions is his greatest work and most famous text, Saint Augustine wrote many documents over his lifetime as a Bishop of the Church. Still today, he is considered one of the greatest minds and theologians the Church has in her Mystical Body. Along with Saint Thomas Aquinas, Saint Augustine is often studied in theological programs in Catholic schools across the world. When I was in graduate school at Franciscan University of Steubenville, Saint Augustine was often taught and quoted by my professors on a daily basis.

Not only did Saint Augustine give us great theological arguments, he is living proof that God has great mercy upon even the most wretched of sinners. His life as a Christian was really the beginning. In her book, My Best Teachers Were Saints, Susan H. Swetnam says, “…One of the most comforting things about him, to me, is his awareness that a person will never have all of the answers in hand as a perfect practioner…even on his deathbed, he recognized the need for penance. Augustine’s life affirms that vocation is an ongoing process…what matters is that we recommit to our vocation each day…faith is a process.”

The following are Saint Augustine’s own words:

On the notion of Religion –

Reply to Faustus the Manichaean Book 20, Chapter 21: “It is true that Christians pay religious honor to the memory of the martyrs, both to excite us to imitate them, and to obtain a share in their merits, and the assistance of their prayers. But we build altars not to any martyr, but to the God of martyrs, although it is to the memory of the martyrs. No one officiating at the altar in the saints’ burying-place ever says, ‘We bring an offering to you, O Peter! or O Paul! or O Cyprian!’ The offering is made to God who gave the crown of martyrdom…What is properly divine worship, which the Greeks call latria, and for which there is no word in Latin, both in doctrine and in practice we give only to God.” (Latria – worship and adoration).

The Church is necessary for Salvation –

The progress in dogma should not be rejected –

The City of God, Book 16, Chapter 2: “For while the hot restlessness of heretics stirs questions about many articles of the Catholic faith, the necessity of defending them forces us to both investigate them more accurately, to understand them more clearly, and to proclaim them more earnestly.”

Grace does not destroy free will –

Letter to Hilary, No. 157, 2:10: “The freedom of the will is not destroyed by being helped; it is rather helped because it is not destroyed. He who says to God: ‘Be my helper’ (Ps. 26:9), confesses that he wishes to carry out what is commanded, but asks help of Him who gave the command so that he may be able to do it.”

Mary is Ever-Virgin (after Christ’s birth) –

On Holy Virginity 4:4: “Thus Christ by being born of a virgin, who, before she knew Who was to be born of her, had determined to continue a virgin, chose rather to approve, than to command, holy virginity. And thus, even in the female herself, in whom He took the form of a servant, He willed that virginity should be free.”

On Christian Doctrine, Book 3, Chapter 16: “’Except you eat the flesh of the Son of Man,’ Christ says, ‘and drink his blood, you have no life in you’ (Jn. 6:54). This seems to enjoin a crime or a vice; it is therefore a figure, enjoining that we should have a share in the sufferings of our Lord, and that we should retain a sweet and profitable memory of the fact that His flesh was wounded and crucified for us.”

Praying for those in Purgatory –

On Care to be had for the Dead, Chapter I:3: “In the books of the Maccabees we read of sacrifice offered for the dead. Even if it were nowhere at all read in the Old Scriptures, not small is the authority, which in this usage is clear, of the whole Church, namely, that in the prayers of the priest which are offered to the Lord God at His altar, the commendation of the dead has also its place.”

The object of beatitude is God alone –

Confessions, Book 1, Chapter 1: “And man, being a part of your creation, desires to praise you. You move us to delight in praising You; for You have made us for Yourself, and our hearts are restless till they find rest in you.” 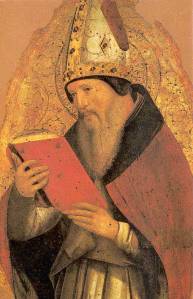