Today is the feast day for the great eastern Church Father, who was Archbishop of Constantinople and is a Doctor of the Church – St. John Chrysostom. He was born around the year of 347 A.D. in Antioch (modern day Syria) and died on September 14, 407 after speaking the words with a dying breathe – “Glory be to God for all things.” For a detailed account of his life, please see New Advent and Catholic Online. As you will read, he was persecuted by the powers of the Empire because he courageously spoke against the false teachings, immodesty, and superstitious beliefs of the time. He, like Jesus, and the Church over the centuries, stood against the modern day culture. We must ask him for his intercession when our Bishops are persecuted for standing against the secular and relativistic society that we live in today. 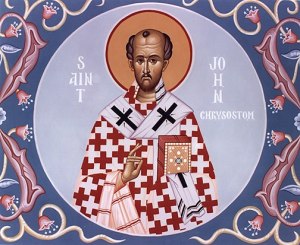 St. John Chrysostom was given the name, “Golden Mouth” because of his eloquence as an orator, but also because he gave such stirring and thought provoking homilies as a priest and Bishop. Even when you read this writings, it’s as if gold is streaming from his mind into his pen and onto the parchment.

As my love and appreciation of the Eastern Rites of the Catholic Church has increased, St. John Chrysostom is one saint that I have come to learn more about recently. I encourage my Roman Catholic brothers and sisters (the Orthodox already have it) to learn more about him as well. We must not forget the early Christian Church was first established by St. Peter in Antioch, before he made his way to Rome with St. Mark, who was his translator. The words of Blessed John Paul II should also give us the desire to know the Eastern Rites of the Church, when he said in Ut Unum Sint, “the Church must breathe with her two lungs!”

Now I give you three “golden” excerpts from the writings of “Golden Mouth” himself – St. John Chrysostom:

The Church is a Hierarchy:

“ ‘To the fellow-Bishops and Deacons’ (Phil. 7:1). What is this? Were there several Bishops one city? Certainly not; but he called the Presbyters [priests] so. For then they will interchanged the titles, and the Bishop was called a Deacon. For this cause in writing to Timothy, he said, ‘Fulfill your ministry’ (2 Tim. 4:5), when he was a Bishop. For that he was a Bishop appears by his saying to him, ‘Lay hands hastily on no man’ (1 Tim. 5:22). And again, ‘Which was given you with the laying on of the hands of the Presbytery’ (1 Tim 4:14). Yet Presbyters would not have laid hands on a Bishop.” (Homilies on Philippians, I:I)

The Mass is a true sacrifice:

“Reverence, now, oh reverence, this Table whereof we all are partakers! Christ, Who was slain for us, the Victim that is placed thereon.” (Epistle to the Romans, 8)

Christ is the victim that is offered in the sacrifice of the Mass:

“For when you see the Lord sacrificed, and laid upon the altar, and the priest standing and praying over the victim, and all the worshippers empurpled with that precious blood, can you then think that you are still among men, and standing upon earth?” (Catecheses, 23:10)

St. John Chrysostom…Pray for all our Bishops and pray for us.