As this new dawn rises on America, it’s a day of sadness. It seems 50% and the electoral college of the United States of America (united is now a loose term) have decided to re-elect a person that opposes religious freedom in this country. Actually, this individual is very hostile toward Christianity, but specifically Catholicism. For the 50% of Catholics (another term used loosely) who chose to vote for this person, what are you thinking? Do you have any idea what you have just done? You reap what you sow! I hope that at some point you will come to realize what your decisions could do to this country.

As Catholics, who are faithful to the teachings of the Church (not like the 50%), we must turn our gaze to the late great pontiff, Pope St. John Paul II. He too lived through the Nazi Empire as well as the Socialists who ruled with Communism in Poland and most of Eastern Europe. Pope St. John Paul was a fundamental figure in the writing of Dignitatis Humanae, the Declaration on Religious Freedom from the Second Vatican Council – because he was living through it!

As faithful practicing Catholics who adhere to the teachings of the Church (not like those numbers above), we must storm heaven with prayers and ask the intercession of Pope St. John Paul II, St. Thomas More (and the fight for religious freedom), St. John Fisher, the Mexican Martyrs, and all the other saints who lived under governments that oppressed religious freedom. 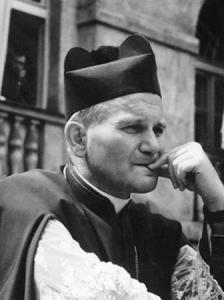 “The challenge facing you, dear friends, is to increase people’s awareness of the importance for society of religious freedom; to defend that freedom against those who would take religion out of the public domain and establish secularism in America’s official faith. And it is vitally necessary, for the very survival of the American experience, to transmit to the next generation the precious legacy of religious freedom and the convictions which sustain it.”

It would seem that John Paul II could see the “writing on the wall” in 1995 as his statement has a prophetic tone to it. So what can we do?  Storm heaven with our prayers and know that God is still God no matter who the person leading a country is and remember the words of Our Lord Jesus Christ and Pope St. John Paul II – “BE NOT AFRAID!” 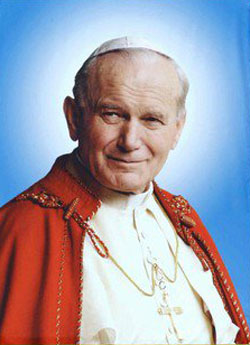