“Mondays with Mary” – Saint Bernadette and Our Lady of Lourdes

This coming Tuesday is the feast day for St. Bernadette. She is famous for receiving eighteen visions at the grotto of Massabiele, beside the River Gave in Lourdes, France. This Marian apparition has become known as Our Lady of Lourdes. It is here on March 25, 1858, the Blessed Mother told Bernadette her name  – “I am the Immaculate Conception.” For more information on Our Lady of Lourdes and the Immaculate Conception click on the links.

Bernadette, a pet name by family and friends, was born on January 7, 1844 and christened Maria Bernarde. She was the oldest of six children born to Francis Soubirous and Louise Casterot. Bernadette was a fragile young woman who always had bouts with asthma and other ailments throughout her entire life. At the time of the first vision, her family was in a very poor state of life living in building that was nearly condemned. As a child, she was regarded as a slow student academically, but was a very good, obedient, and virtuous youth who took care of her brothers and sisters with gentle care, even though she suffered with physical ailments.

The apparitions at Lourdes did some good for her family, however, she endured great persecution and endless questioning once the visions has ceased only a few months after they had begun. To protect her from such harassment, the nuns at the hospice took her in and she resided with them for five years; however, people came to the hospice also asking her questions.

In 1864, she offered herself to the sisters of Notre-Dame de Nevers. She would not enter the novitiate of the motherhouse until 1866 since she had to endure attacks of sickness. Being away from her family and the grotto where the Blessed Mother appeared to her was difficult, but she was very happy with her sisters at Nevers. After residing at the motherhouse for only four months, she took sick and received last rites (now Anointing of the Sick), however, she recovered and worked as an infirmarian (nurse) and a sacristan. The asthma that she endured and suffered with her whole life led to other health complications.

On April 16, 1879, Bernadette Soubirous died – she was 35 years old. In 1933, Pope Pius XI canonized her a saint of the universal church. She is the Patron saint of Lourdes, France; bodily sickness; sick people, and shepherds.

Let us offer prayers for the intercession of Our Lady under her title at Lourdes and also ask for intercession from St. Bernadette for those who are burdened with illness and physical suffering. 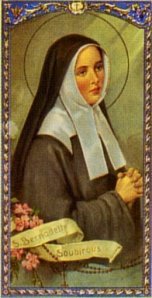