As I watched the Evening Vigil tonight on EWTN with Pope Francis on the Copacabana Beach in Brazil, it brought back fond memories of my own experiences at the two World Youth Day celebrations I attended. 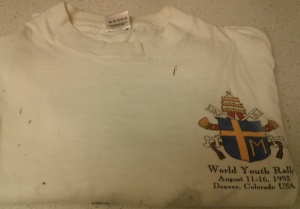 The first World Youth Day I attended was held in Denver, Colorado in 1993 when I was nineteen years old. The young adult group at St. Maria Goretti Catholic Church sponsored the pilgrimage (one of the young adults on that pilgrimage is now a priest for the Diocese of Phoenix – Rev. Pete Rossa). Our young adult leader at the time, Bobby Kloska, fired us up about attending and seeing the great Pope John Paul II. Above is the T-Shirt BK made for the pilgrimage.

The World Youth Day experience is great because you are able to witness so many young people from around the world praising Jesus Christ and listening to his Vicar. World Youth Day really showed me for the first time in my life the universality of the Catholic Church. Twenty years later and I still cherish the experience deep in my heart.

“Do not be afraid to go out on the streets and into public places, like the first Apostles who preached Christ and the Good News of salvation in the squares of cities, towns and villages. This is no time to be ashamed of the Gospel (Cf. Rom 1,16). It is the time to preach it from the rooftops (Cf. Mat 10,27). Do not be afraid to break out of comfortable and routine modes of living, in order to take up the challenge of making Christ known in the modern “metropolis”.”

The second World Youth Day I attended was in Rome, Italy during the Jubilee Year 2000. At the time, I was twenty-six years old and the Director of Youth Ministry at St. Thomas Aquinas Catholic Church in Litchfield Park, Arizona. There were 22 of us on the pilgrimage which first visited Turin, Italy. The group consisted of teenagers from the parish, a few adult chaperones, my sister, her friend from college, and our Pastor, Fr. Kieran Kleczewski. It was by far the best experience of the two World Youth Day celebrations I attended. First, I had never been so close to Blessed Pope John Paul before, and second, my sister Carla was with me on the trip.

The first time we saw him up close was when the Pope Mobile drove right by our group on the Via dei Fori in the heart of Rome amidst the Roman ruins and the Colosseum. I could have leaned over the railing and the touched the Pope Mobile. We were all in tears of joy as he drove by us. It was said that being so close to the living saint, people would be brought to tears. Even though he drove by us quickly, the fact still remains, we were all brought to tears. 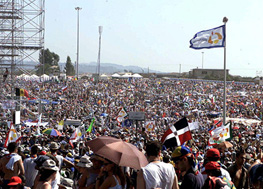 The second time was when we walked to Tor Vergata for the Evening Prayer Vigil and closing Mass on Sunday morning. As we were walking in, I remember Carla was right next to me, and the Pope Mobile was right in front of us. We were in a crowd of 2 million people trying to catch a glimpse of the future saint. I can still remember the beauty behind the Vigil and the Mass on the field at Tor Vergata. It was yet another great experience that I will cherish for the rest of my life.

“Dear friends, when you go back home, set the Eucharist at the centre of your personal life and community life: love the Eucharist, adore the Eucharist and celebrate it, especially on Sundays, the Lord’s Day…May every community always have a priest to celebrate the Eucharist! I ask the Lord therefore to raise up from among you many holy vocations to the priesthood.” 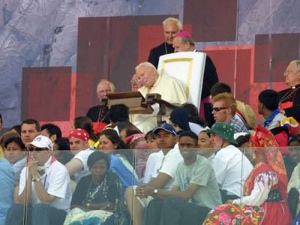 As I watched Pope Francis tonight speak and then lead Adoration of the Most Blessed Sacrament during the Vigil with three million people on the beach, I was brought to tears remembering Blessed Pope John Paul II and the impact these events had in my own life of faith. His idea to bring the youth of the world together in these events is still being felt years after his entrance into Heavenly Glory.

My time has passed to attend such events for the youth of the world, but I encourage those who have never been and are between the ages of 16-35 to go to the next World Youth Day that will be announced in a few hours by Pope Francis. With that being said, if the next World Youth Day is in the city that’s being rumored (Krakow), I might have to just go, even if I will be 42 years old. We shall see!