Today we celebrate the memorial of one of the most prolific Doctors of the Church in the modern era, not because of the large quantities of her writing, but the impact and simple quality of her writing and how it reaches into the depths of our souls when we read it. Although she is known as the “Little Flower” or “Saint Thérèse of the Child Jesus”, she is often referred to as the “Doctor of Merciful Love” for her magnificent writings on the mercy and love of God. Read the complementary post, Offering to Merciful Love, to attain a sense of the beauty this little saint has given us.

Saint Thérèse of Lisieux is one of the most famous saints in the Catholic Church over the last 115 years. Countless miracles have been attributed to her and the scent of roses usually follows. Millions of people love her and have a strong devotion to this “Little Flower” from Lisieux. Personally, she is in the top three saints I would love to meet when I enter heaven (St. Thomas Aquinas and Blessed John Paul II would be the other two).

Thérèse was born on January 2, 1873 to Blessed Louis and Zélie Martin. She was baptized Marie-Francois-Thérèse. She was the youngest of five children who survived to maturity. She had a very joyful and ordinary childhood. Her mind was very open and filled quickly with intelligence. In 1877, Zélie Martin died of breast cancer, leaving Louis to raise five girls on his own. He sold his business in Alencon and moved to Lisieux, where the children were under the care of their aunt. Thérèse was very special to her father and he cared for her deeply.

When Thérèse was nine years old, her sister, Pauline, entered the Carmel at Lisieux. She had a strong attraction to the life of a Carmelite as well. Five years later, Mary followed Pauline into Carmel. Watching her sisters enter religious life was both a joy and a struggle for Thérèse, because she wanted to join so badly. The Christmas before her eventual entrance to Carmel is referred by Thérèse as “my conversion.” That night she had an experience with the child Jesus. She says,

“On that blessed night the sweet infant Jesus, scarcely an hour old, filled the darkness of my soul with floods of light. By becoming weak and little, for love of me, He made me strong and brave: He put His own weapons into my hands so that I went on from strength to strength, beginning, if I may say so, ‘to run as a giant.’”

After asking her father permission to join, in which he gave his full approval, Thérèse tried to enter Carmel. However, due to her young age, the Carmelite authorities, supported by the bishop of Bayeux refused her entrance.

Some months later while on pilgrimage with her father in Rome for the sacerdotal jubilee of Pope Leo XIII, Thérèse, who was told not to say anything directly to the Holy Father as he blessed her, boldly and courageously, asked the Pope, “In honor of your jubilee, allow me to enter Carmel at fifteen.” Pope Leo was astonished at the young girls request and found it to be impressive, but said to her, “If the good God wills, you will enter.”

On April 9, 1888, Thérèse was given approval to enter Carmel. Three of the five Martin sisters were now Carmelites. In 1889, the sisters suffered a great loss when the mind of Louis Martin suffered two strokes and was taken to an asylum where he would live for three years, cared for by Celine, another of the sisters. Reflecting on her fathers’ suffering, Saint Thérèse said, “the three years of my father’s martyrdom seem to me the dearest and most fruitful of our life. I would not exchange them for the most sublime ecstasies.”

One year later, on September 8, 1890, Thérèse professed her final vows. She was in poor health, but remained strong and steady. On her final profession day, she said she felt like a queen and “I took advantage of my title to gain all the favors I could from the King for His ungrateful subjects. I did not forget anyone. I wanted all the sinners of the world to be converted that day, and purgatory emptied of every single captive.”

She lived the life of a cloistered Carmelite well, often praying for priests, which is a primary duty of Carmelites. However, she did struggle in prayer and often fell asleep while praying. She felt at times great distress and dryness of prayer. She carried most of the austere Carmelite rules out efficiently, but because of her poor health, was not permitted to fast, since it could take a toll on her overall condition.

In 1893, she was appointed as assistant novice mistress and actually did the work of mistress, but never had the official title. One year later, Louis Martin died after years of suffering mentally and physically from his strokes. Celine, the sister taking care of him, entered Carmel to join her three sisters.

The Carmelites from Hanoi in Indo-China requested her to join them, but she had to decline because of her poor physical condition. During the last eighteen months of her life, she endured great physical suffering and spiritual trials. She entered the infirmary in June 1897 and was unable to receive Holy Communion because she was frequently sick.

On September 30, 1897, with the words of divine love on her lips, Saint Thérèse entered Heavenly glory. In 1923, Pope Pius XI beatified her and two years later, he canonized her a saint. In 1927, she was declared the heavenly patroness of the foreign missions, never leaving the grounds of Carmel. 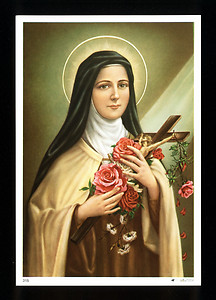 On October 19, 1997, the soon to be saint himself, Blessed John Paul II, declared Saint Thérèse of Lisieux, a Doctor of the Church. During his homily, the Holy Father said,

“Thérèse of the Child Jesus and the Holy Face is the youngest of all the “doctors of the Church”, but her ardent spiritual journey shows such maturity, and the insights of faith expressed in her writings are so vast and profound that they deserve a place among the great spiritual masters…[she] did not only grasp and describe the profound truth of Love as the centre and heart of the Church, but in her short life she lived it intensely. It is precisely this convergence of doctrine and concrete experience, of truth and life, of teaching and practice, which shines with particular brightness in this saint, and which makes her an attractive model especially for young people and for those who are seeking true meaning for their life…. In a time like ours, so frequently marked by an ephemeral and hedonistic culture, this new doctor of the Church proves to be remarkably effective in enlightening the mind and heart of those who hunger and thirst for truth and love.”

Vatican Website, http://vatican.va, Homily by Blessed John Paul II on Proclamation of St. Therese of the Child Jesus and The Holy Face as  “Doctor of the Church”