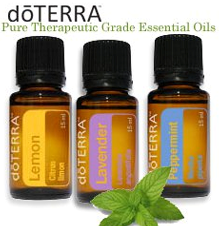 “Every Time A Bell Rings, An Angel Gets His Wings.”

Someone once asked St. Thomas Aquinas, how many angels he thought there were in the heavens. His reply, “lots.” Now that’s not a humorous reply but think about the stars in the sky or the fish in the sea. If God can create that beauty here on earth, imagine what He can do in the Heavenly realm. Many people have opinions on who angels are and are not. Let’s first understand what the angels are not, then we will discuss what the Catholic Church teaches about the angels. 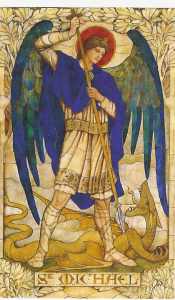 First, angels are not chubby and baby-faced. They are warriors in an army (stratia in the Greek) who would and have fought for God. There was a great battle in Heaven before the world was created (read Revelation 12:7-12). Remember what Jesus says in the Gospel of Matthew when the Temple guards come to arrest him – “Do you think that I cannot appeal to my Father, and he will at once send me more than twelve legions of angels?” (26:53). A legion at that time consisted of 5,300 men. That means Jesus could have had 63,600 sword-wielding angel warriors fighting for him.

I know that Hollywood always portrays us as going to Heaven and getting a “pair of wings”, but in reality, we don’t get wings. Angels are God’s creatures, but different than humans. Angels don’t have wings since they don’t have bodies. They can move from place-to-place by just thinking. In artistic paintings and statues, angels are portrayed as having wings and look male and female, however, this is only the case because it helps us relate to them better and to understand their powerful intellect.

Now that we have cleared up some of those assumptions, let’s talk about the angels and who they are in God’s divine plan since today is the Feast of the Guardian Angels. The angels are neither male nor female. Since they are pure spirits, they do not possess the bodily traits of gender (read Heb 1:13-14, CCC 328, CCC 330), even though in the Scriptures angels appear as males as in the cases of Michael, Gabriel, and Raphael. 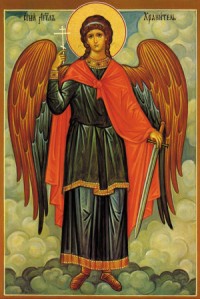 The Greek word, angelos, is defined as angel. Angels are pure created spirits who have superior intellects and firm wills. God created the angels good, but some chose to disobey God and were banished from heaven, as I stated above. There are nine choirs of angels: seraphim, cherubim, thrones, dominions, virtues, powers, principalities, archangels, and angels. We know they exist because they are spoken about in the Holy Scriptures (public revelation). Please read Psalms 34:7 and 90:11, Job 33:23-24, Zechariah 1:12; Tobit 12:12 Matthew 18:10, and Luke 16:22.

Guardian angels are created heavenly spirits who help and guard those to whom they have been assigned. All of us have a guardian angel and even some people have two or more angels that protect them. The additional angels are not family members that once lived here on earth. Catechism of the Catholic Church paragraph 336 states, “From its beginning until death, human life is surrounded by their watchful care and intercession…already here on earth the Christian life shares by faith in the blessed company of angels and men united in God.”

Jesus said when talking about children, “See that you do not despise one of these little ones, for I say to you that their angels in heaven always look upon the face of my heavenly Father.” Even though the Jewish Tradition (except for the Sadducees) and Catholic Tradition had a devotion to the angels, it was not until the 17th century when Pope Clement X officially declared the devotion to the guardian angels as valid.

Theologians believe that all human beings have a guardian angel – baptized or non-baptized. It is also believed that guardian angels don’t get a new assignment when our life is through. They enter into the heavenly kingdom with us. St. Basil the Great said, “Beside each believer stands an angel as protector and shepherd leading him to life.”

Some might ask if they would enter into Hell. I would speculate they do not since Hell is completely devoid of God and his goodness. Once a soul is in Hell, there is no leaving. It’s a choice to be there. While here on earth, our guardian angels never leave us, even if we tell them to do so. I experienced this before where people said to their guardian angels – you go and pray before Jesus in Adoration while I study or do something else. This is nonsense and should be avoided.

The guardian angel’s primary position is to act as a mediator between God and man. St. Thomas Aquinas said, “The angels work together for the benefit of us all.” The amount of angels is gigantic and the scriptures speak of them as “a thousand thousands served him, and ten thousand times ten thousand” (read Dan 7:10; Ps 67:18), just as St. Thomas Aquinas said, “there are lots.” In Marian Theology, one of the titles for the Blessed Mother is Queen of the Angels. Mary is the Queen of all rational creatures, along with men, the angels are included.

The Guardian Angel prayer is a prayer that many children are first taught by their parents as they go to sleep for the night. It is a simple prayer, but one we should all know. 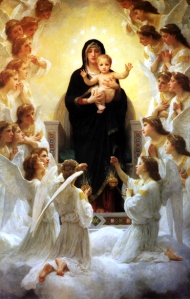 In his sermon on the Feast of the Guardian Angels, St. John Vianney, once said, “Our Guardian Angels are our most faithful friends, because they are with us day and night, always and everywhere. We ought often to invoke them.”

In a letter to his spiritual daughter, St. Padre Pio said, “Know, O Raffaelina, that this good Angel prays for you; offers to God all the good works you accomplish; your holy and pure desires. In the hours when you seem to be alone and abandoned, do not complain of not having a friendly soul to whom you can unburden yourself and in whom you can confide your sorrows. For pity’s sake, do not forget this invisible companion, always present to listen to you, always ready to console you.”

On this day of the Guardian Angels, let us pray that our relationship with them who watch over us perpetually can grow and strengthen through the assistance of Jesus Christ and His Holy Mother. Amen.

Tagged as: angels, Every Time A Bell Rings An Angel Gets His Wings, Guardian Angel Prayer, Guardian Angels, nine choirs of angels, pure spirits, Queen of the Angels