Out of the 35 Doctors of the Church, today’s Doctor has to be in the top 5, if such a list even existed. Why would this Doctor be in the Top 5? Simply, in my humble opinion, because she is the Doctor of Prayer. Although the other 34 Doctors mention prayer, today’s Doctor has some of the greatest writings about “our simple conversation with God.” She would say, people who don’t pray are like people who don’t use their hands or feet. For excerpts on some of her teachings, please see the complementary post, The Words of Saint Teresa of Avila. 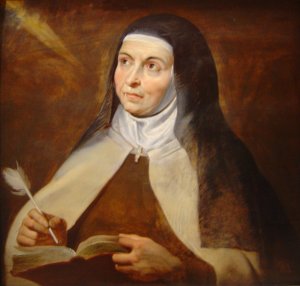 Saint Teresa was born on March 28, 1515 near Avila in Castile. At a very young age, she loved reading about the Lives of the Saints, with her younger brother. They both loved the martyrs so much that they left in secret at the young age of seven to enter the land of the Moors, in the hopes to die for Jesus Christ. However, before they could get there, their uncle met them and he brought them home to their very upset mother.

After being reprimanded by their mother for what they did, they then tried to build hermitages in their backyard made of stone. Teresa had a longing to be in solicitude with Our Lord and would often reflect on the image of the Samaritan Woman at The Well with Jesus. She often say, “Lord, give me of that water that I may not thirst.”

After her mother died when she was fourteen, Teresa was sent by her father to an Augustinian convent to be educated with girls her own age, however, she had to be taken out after only 1 ½ years due to an illness. Not being home long, Teresa went to her father and told him that she was thinking about becoming a nun. He refused immediately. So she secretly left and entered the convent of the Incarnation of the Carmelite Nuns in Avila.

At the age of 21, at the point of her profession, she became very sick with malignant malaria. Her father came again, removed her, and placed her in the care of doctors who made her illness worse and eventually gave up on her. Faced with this great suffering, Teresa began to pray and to pray hard.  Her uncle, a devout man of God, gave her the book, Third Spiritual Alphabet. She engaged in mental prayer, but did not make great progress since she lacked a spiritual director. After three years of severe suffering, she regained her health.

At the death of her father, his confessor, a Dominican friar, warned her that her prayer life was truly lacking and needed to be rediscovered. Instantly, she returned to her prayer life and would never abandon it again. She began devotions to two of the great penitent saints – St. Mary Magdalene and St. Augustine. She removed herself from the social world focusing on deep quiet prayer, which brought her joy and love. On different occasions, she had encounters with Our Lord, but fearing what these meant, kept them in secret. Eventually through the suggestion of a dear friend, the one she claimed brought her salvation and comfort, she spoke with a Jesuit priest. He told her that her interior life was not correctly founded and although her prayer experiences were valid and from God, she should ignore them for two months. She could not resist them!

After speaking with a variety of other spiritual directors, who all claimed that her experiences were from God, she fell into a rapture after saying the Veni Creator Spiritus one day. She heard a voice say, “I will not have you hold conversation with men, but with angels.” Her sufferings and persecutions continued while she remained in deep prayer and seclusion. The Heavenly conversations purified her soul and gave her a humble heart. She often was caught into raptures. She experienced spiritual espousals, mystical marriages, and a piercing of her heart.

During these many years, as she founded the reformed Carmelite convents, she wrote one of her greatest writings, the Interior Castle, a text written for the instruction of the Church. She also wrote the Way of Perfection for the direction of her nuns, which was accompanied by Foundations, a book of encouragement for her nuns.

After being a Carmelite Nun for nearly twenty-five years, St. Teresa took on her greatest challenge yet. The Carmelites had lost their great austerity and enthusiasm by the early 16th century. Many of the nuns entered the convent for a relaxed life. They did not live up to their professions and were often found socializing with the townspeople instead of praying or doing their daily work.

Although her movement to reform the Carmelite Order was approved by Church officials, she was met with violent opposition from her fellow nuns, the nobility, the magistrates, and the people of Avila. She was constantly encouraged by a Dominican friar to take on this gut-wrenching endeavor, since it needed to be done! Along with her married sister, Dona Juana de Ahumada and her husband, they began to build a new convent in Avila in 1561. Rome approved of the new house and through the authority of the Bishop, the house was set-up under the name of St. Joseph, Mass was celebrated, and three new nuns entered the Discalced Carmelites.

Life was very strict for the new nuns. There was nearly perpetual silence and a very austere and poverty stricken way of life. Since the new order did not have a lot of revenue, the nuns wore habits of coarse serge, sandals instead of shoes (why they are known as “discalced”), and were bound to perpetual abstinence. For the first five years, St. Teresa could only take on 13 nuns.

In 1567, John Baptist Rossi, the prior general of the Carmelites came to Avila. He was impressed so much with the reforms St. Teresa made, even though he was not informed of the creation of St. Joseph’s convent, he charged her to reform other Carmelite convents across Spain as well as to reform two Carmelite friaries in Castile. 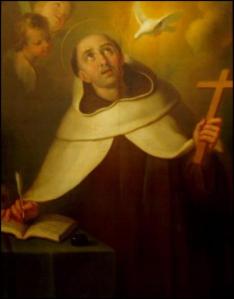 While traveling at Medina del Campo in Toledo, she met two Carmelite friars; both were very open to her reforms of the order. They were Antony-of-Jesus (de Heredia) and John Yepes, who would become St. John-of-the-Cross. In 1568-1569, St. Teresa founded two convents for men, both in extreme poverty and austerity. She left St. John-of-the-Cross in charge of the male convents.

At this time in the Church, Pope St. Pius V sent out apostolic visitors to look upon the religious orders Rome felt needed to be reformed because of their lax lifestyles. After the Dominican, Peter Fernandez, visited the Carmelites at Castile (St. Teresa’s original convent) and found great disorder there, he sent for Teresa and made her prioress. Many of the nuns disobeyed her and some went into hysterics when she told them what they needed to do. She told them she was there to serve them, but could not coerce them.

The prior general who charged St. Teresa to make the necessary reforms now supported the objectors. St. Teresa was told to choose one of her convents where she would reside no longer establishing or reforming other convents. St. John-of-the-Cross was imprisoned in a monastery by his Carmelite Brothers, but eventually escaped out a window. Eventually, after some Church officials were replaced, the reform of the Carmelites continued with great zeal and fruit.

Saint Teresa of Avila received many great talents from God. She had a calm and beautiful personality that resounded from the tenderness of her heart. She had a great understanding of people and how they interacted with one another. She had a mature wit and intelligence that was known by many.  When choosing novices for her convents, she wanted them first to have intelligence and good judgment. Although piety was important, she believed that could be trained.

St. Teresa found 17 Discalced Carmelite convents. At the end of her life, she chose to return to Avila, but never made it back because a friend who was a Duchess wanted her to visit. Arriving at the Duchess’ home, ill nourished and sick, St. Teresa knew the hour of her death was upon her.

On October 4, 1582, in the arms of Blessed Anne-of-St-Bartholomew, Saint Teresa Avila entered Eternal glory. In 1622, Pope Gregory XV canonized her a Saint of the Church. In 1970, Pope Paul VI declared her a Doctor of the Church.