Saint Cyril was born in or near Jerusalem in the year 315 A.D. His Christian parents, who provided him with an excellent education that focused on the Scriptures, raised him well. Seeing the great abilities that Cyril displayed academically, St. Maximus, Bishop of Jerusalem at the time, ordained him to be a priest. He was put in charge of instructing the catechumens (non-baptized) because of his great skill of educating those who did not know the faith.

Twenty-four of his catechetical writings are available to us today, maybe the only ones ever put down in writing, since he could teach the faith without the assistance of any books. His writings give us a glimpse of what catechetical instruction was like during the early to middle fourth century in the Church. Speaking on the catholicity of the Catholic Church, St. Cyril of Jerusalem says in his Catechesis,

“And if ever you are sojourning in cities, inquire not simply where the Lord’s House is (for the other sects of the profane also attempt to call their own dens houses of the Lord), nor merely where the Church is, but where is the Catholic Church. For this is the peculiar name of this Holy Church, the mother of us all” (No. 17:14).

After the death of St. Maximus in 348 A.D., St. Cyril was elevated to the episcopacy by the Metropolitan of Caesarea in Palestine, Bishop Acacius, who thought he had an ally in Cyril, however, that proved to be incorrect. Bishop Acacius was a philo-Arian and thought that Cyril had Arian tendencies (Jesus was lower than God, but higher than man; a demigod of sorts) as well. It didn’t take long for the two to figure out how different they truly were from one another doctrinally as well as in their understanding of jurisdiction. Cyril quickly claimed that he was autonomous of the Metropolitan Bishop Acacius.

Over a twenty-year period, Cyril was exiled three times from his See in Jerusalem. His first exile came after being deposed by the Synod of Jerusalem in 357 A.D. In 360 A.D., he faced his second exile, which was started by Acacius. His third and last exile, the longest of the three, which lasted eleven years beginning in 378 A.D., began under the philo-Arian Emperor Valens. It wasn’t until the death of Valens that Cyril was able to return to Jerusalem to oversee his episcopate seat and bring unity and peace back to the faithful under his care.

After many years of enduring great sufferings, Cyril was vindicated and took his seat as the Metropolitan of Jerusalem next to the Patriarchs from Antioch and Alexandria at the great second ecumenical Council of Constantinople. It was during this council that the Nicene Creed, which was begun at the Council of Nicaea in 325 A.D., was promulgated. Cyril, along with the others gathered at the council affirmed and accepted the term, “homoousios” (Greek for ‘of one being’ and ‘one in being’). 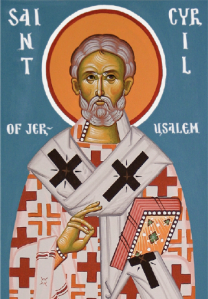 In 382 A.D., after the Council of Constantinople, Cyril wrote a Synodal Letter. In this letter, addressed to the Roman Pontiff, he writes how the Eastern Bishops support his sound orthodoxy, his rightful place as the Bishop of Jerusalem, and his deeds as pastor and shepherd.

St. Cyril was a master of the written word and his writings on catechesis impacted the early church for centuries. Out of the twenty-four catechetical writings we have of his today, the first eighteen focus on how catechumens come to the light of Baptism. He wrote heavily on the importance of Baptism and how the rite plays an important role in the conversion of souls coming from the immoral pagan life. Along with Baptism, Cyril wrote at great lengths on the Creed (Nicene-Constantinople), the Our Father, and the rites of Confirmation, Holy Eucharist, and the Eucharistic liturgy.

In his Catechesis 5, when speaking about the rebirth a Christian experiences in Baptism, St. Cyril says,

“You have been caught in the nets of the Church (cf. Mt 13:47). Be taken alive, therefore; do not escape, for it is Jesus who is fishing for you, not in order to kill you, but to resurrect you after death. Indeed, you must die and rise again (cf. Rom 6:11, 14)…Die to your sins and live to righteousness from this very day.”

For St. Cyril of Jerusalem, all catechesis, whether doctrinal, moral, or “mystagogical”, was rooted in the dogmas of the Church. The dogmas of the Catholic Church would penetrate the very soul of the one hearing it and thus lead them to a new life in Christ through Baptism. In his Catechesis 3:12, he states,

“[The Church] is called Catholic then because it extends over all the word, from one end of the earth to the other; and because it teaches universally and completely one and all the doctrines which ought to come to men’s knowledge, concerning things both visible and invisible, heavenly and earthly…it universally treats and heals the whole class of sins, which are committed by soul or body…”

This systematic approach to catechesis focusing on the doctrinal, moral, and mystagogical, set the world on fire through the Spirit for centuries in the early Church. For us Christians today, to set the world ablaze again with the love of Jesus Christ and His Catholic Church, we must catechize with this same approach focusing on the body, soul, and spirit of the human person.

St. Cyril of Jerusalem died in 386 A.D. at the age of seventy years old. Pope Leo XIII declared him a Doctor of the Church in 1882.