Today, in the Western lung of the Catholic Church, we celebrate the great African Doctor – Saint Augustine of Hippo. Eloquent in his life and his words, the Church dons him the name – The Doctor of Grace. Even after 1600 years, the Catholic Church views him as one of the greatest theologians in her arsenal; an arsenal filled with many great fighters and defenders of Jesus Christ. The Church also sees him as one the greatest conversion stories of any saint.

Today, I am not going to focus on his biographical life, since I have done this in years past. For today’s memorial, I want to share with you Saint Augustine through the words of Pope Benedict XVI. In his general audiences from March 7, 2007 to February 27, 2008, Benedict taught on the Church Fathers from Clement of Rome to Augustine. So important is Saint Augustine to the Catholic Church that the Holy Father dedicated five general audiences to him from January 9 – February 27, 2008.

Here are 10 excerpts from the five audiences –

1. “It could be said, on the one hand, that all the roads of Latin Christian literature led to Hippo (today, Annaba, on the coast of Algeria), the place where he was Bishop from 395 to his death in 430, and, on the other, that from this city of Roman Africa, many other roads of later Christianity and of Western culture itself branched out.”

3. “Yet, if the world grows old, Christ is perpetually young; hence the invitation: “Do not refuse to be rejuvenated united to Christ, even in the old world. He tells you: Do not fear, your youth will be renewed like that of the eagle” (cf. Serm. 81,8). Thus, the Christian must not lose heart, even in difficult situations, but rather he must spare no effort to help those in need.”

4. “When I read St. Augustine’s writings, I do not get the impression that he is a man who died more or less 1,600 years ago; I feel like he is a man of today: a friend, a contemporary who speaks to me, who speaks to us with his fresh and timely faith. In Saint Augustine, who talks to us…for Christ is truly yesterday, today, and for ever.”

5. “Thus, Augustine’s entire intellectual and spiritual development is also a valid model today in the relationship between faith and reason, a subject not only for believers but for every person who seeks the truth, a central theme for the balance and destiny of all men.”

6. “Here, then, Augustine encountered God and throughout his life experienced him to the point that this reality – which is primarily his meeting with a Person, Jesus – changed his life, as it changes the lives of everyone, men and women, who in every age have the grace to encounter him. Let us pray that the Lord will grant us this grace and thereby enable us to find his peace.” 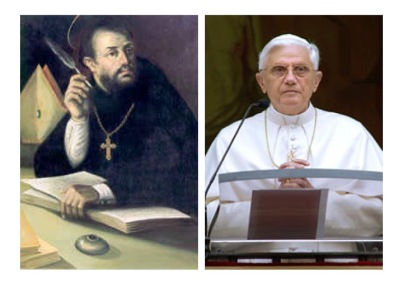 8. “Only by reading Saint Paul’s Epistles within the faith of the Catholic Church was the truth fully revealed to him. This experience as summarized by Augustine in one of the most famous passages of the Confessions: he recounts that, in the torment of his reflections, withdrawing to a garden, he suddenly heard a child’s voice chanting a rhyme never heard before: tolle, lege, tolle, lege, “pick up and read, pick up and read” (VIII, 12, 29).”

9. “We always need to be washed by Christ, who washes our feet, and be renewed by him. We need permanent conversion…Augustine converted to Christ, who is truth and love, followed him throughout his life, and became a model for every human being, for all of us in search of God.”

10. “Even today, as in his time, mankind needs to know and above all to live this fundamental reality: God is love, and the encounter with him is the only response to the restlessness of the human heart; a heart inhabited by hope…so much so that Saint Paul wrote that “in this hope we were saved” (Rom 8:24).”

It is my hope, as it is with many of my blog posts where I quote the Doctors, the Saints, and the Popes, that you will come to take their words to heart in order that you know Jesus Christ in a complete way as well as come to know the beauty of the Catholic Church.

Saint Augustine of Hippo…Pray for Us.