What is Infallibility? (With a little help from Bishop Robert Barron)

Over the past couple of days, as Pope Francis has been in the United States on his Apostolic Journey, I have seen comments made on social media as well as in the news outlets about the teachings of the Catholic Church. Frankly, most people that speak ill about the Church’s teachings, Catholic or not, usually speak in ignorance (they just don’t know & different than stupidity) or they speak ill of the Church because they hate what she stands for. This is not something new. We have seen in the past and will see it in the future.

I think Venerable Archbishop Fulton J. Sheen summarizes perfectly this notion when he says, “There are not one in a hundred people in America who hate the Catholic Church. There are millions who hate what they wrongly believe to be the Catholic Church.” As my pastor has said in the past and in his article on the Sacramental Worldview from our Sunday bulletin on August 30 (page 4), most people don’t understand the Church’s teachings because they lack an understanding of the Catholic Worldview, which is much different than the worldview of the secular culture and different than that of our Protestant brethren. 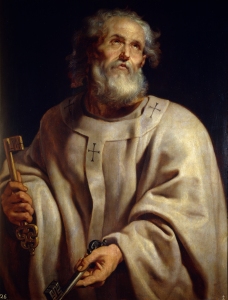 So for this blog post, let‘s focus our attention on the teaching of Infallibility, but instead of explaining it to you in my words, below is a great 3 minute and 57 second clip from now Bishop Robert Barron’s series Catholicism. Before we get to this video clip, let’s examine what the Catechism of the Catholic Church teaches about Infallibility and define some terms. Paragraph 891 says,

“The Roman Pontiff, head of the college of bishops, enjoys this infallibility in virtue of his office, when, as supreme pastor and teacher of all the faithful – who confirms his brethren in the faith he proclaims by a definitive act a doctrine pertaining to faith or morals. . . . The infallibility promised to the Church is also present in the body of bishops when, together with Peter’s successor, they exercise the supreme Magisterium,” above all in an Ecumenical Council. When the Church through its supreme Magisterium proposes a doctrine “for belief as being divinely revealed,” and as the teaching of Christ, the definitions “must be adhered to with the obedience of faith.” This infallibility extends as far as the deposit of divine Revelation itself.

Pope (Roman Pontiff) – The successor of St. Peter as Bishop of Rome and Supreme Pontiff of the universal Catholic Church. The Pope exercises a primacy of authority as Vicar of Christ and shepherd of the whole Church.

Collegiality (college of bishops) – The principle that all the bishops of the Church with the Pope at their head form a single “college,” which succeeds in every generation the “college” of the Twelve Apostles, with Peter at their head, which Christ instituted as the foundation of the Church. This college of bishops together, with, but never without, the Pope has supreme and full authority over the universal Church. Same as Body of bishops.

Doctrine/Dogma – The revealed teachings of Christ which are proclaimed by the fullest extant of the exercise of the authority of the Church’s Magisterium. The faithful are obliged to believe the truths or dogmas contained in Divine Revelation and defined by the Magisterium.

Magisterium – The living, teaching office of the Church, whose task it is to give as authentic interpretation of the word of God, whether in its written form (Sacred Scripture), or in the form of Tradition. The Magisterium ensures the Church’s fidelity to the teaching of the Apostles in matters of faith and morals.

Ecumenical Council – A gathering of all the bishops of the world, in the exercise of their collegial authority over the universal Church. An ecumenical council is usually called by St. Peter, the Pope, at least confirmed or accepted by him. (Last ecumenical council was Vatican II, held from 1962-1965).

Obedience of Faith – The first obedience is that of faith: to listen and freely submit to the word of God.

Deposit of Divine Revelation (Deposit of Faith) – The heritage of faith contained in Sacred Scripture and Tradition, handed on in the Church from the time of the Apostles, from which the Magisterium draws all that it proposes for belief as being divinely revealed.

Authority (mentioned in a few of these definitions) – Not “power” but “right” such as “author’s rights”. The Church only has authority because she is under the authority of her Author and Lord. Authority of the Church is not control or arrogance, but humility in its origin, who is Jesus Christ.

Now with these terms defined and everything else explained, let’s get a little help from Bishop Robert Barron on Infallibility. Like he did on Tuesday using golf as analogy for understanding the law and freedoms of God, in this clip he uses baseball to explain Infallibility.