“Mondays with Mary” – Our Lady of Copacabana (Bolivia)

Well, it’s been three weeks since I last wrote on here. I return to you as a newly and very happily married man. It was just over 2 weeks ago when my Bride and I tied the knot in our Sacramental marriage here at the parish. Later this week, I will post the printed words and the recorded audio of our homily Mass given by my former boss, Pastor Emeritus, Fr. Will Schmid. Make sure you return in a few days to read or listen to the homily…it’s a good one!

For today’s “Mondays with Mary”, I am going to continue focusing on the different National Marian Shrines from across the globe. Today we head to the South American country of Bolivia where we will learn about – Our Lady of Copacabana.

The story of Our Lady of Copacabana begins in the land of the once dominant Incan Empire. In the majestic ice-capped Andes Mountains, on the border of Peru and Bolivia, sits the blue mountain lake, Titicaca. Within the boundaries of the lake is a tiny cove known as, Sepe-cabana or Copacabana. It was in this cove during the Incan Empire where the people of the land worshipped on a daily basis the Sun god. This shrine to the god of the Sun became a favorite place of devotion for the Incan people.

When the Spanish Conquistador’s arrived, with Catholic missionaries in tow, they found all the important sites of Incan worship and planted a cross depicting the one true God. They also built a church in Copacabana, which was dedicated to the intercession of St. Ann. Although this was seen as a good thing, the crops did not grow, people left the area, and destitution set in. The people gathered to come up with a different name for the church. 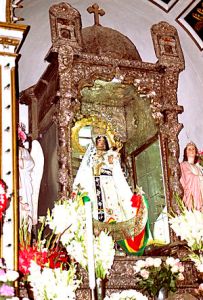 During the year of 1581, a young Incan, Francisco Yupanbi, wanted his town to be named after Our Lady. Not telling anyone, he started to create a statue of the Virgin and Child, however, once he shared what he created with his fellow villagers, he was mocked, because he no formal training in art, and it showed in his work. Proven to get it right, Francisco departed his town and traveled to the best Bolivian towns where art was being done well and churches and monasteries were being built.

Months after many failing attempts, he completed the statue dedicated to – Our Lady of Copacabana. A Virgin, with the characteristics of his own race, and in her arms, an Infant very similar to the many Incan babies Francisco had seen on his travels. Many of his teachers and mentors are blown away by the beautiful statue created, but once he arrived back home, he was again mocked for they would not like his “lump of plaster” even though they had not seen it yet. His labor of love would not be accepted by the town delegation, that’s until Our Lady changed their minds.

When the box was opened that contained the statue, the town’s people were amazed and astonished at the beauty of the face of the Virgin Mother, because she looked like them. They welcomed Francisco and his labor of love. Once the statue was set up in the town, miracles upon miracles began to occur through the intercession of Our Lady. Eventually, a church was built to house the many pilgrims that flooded the town of Copacabana. Jewels from the faithful were given to church. They were placed on the statue.

After returning home, Francisco, a good and holy man, entered a monastery. It would be here where he would live the remainder of his days. Many miracles and cures continued to occur around and through the statue. The statue remains today as symbol of great faith for the Bolivian people, first starting with the faith of Francisco, and then the people of Copacabana. She is the Mother of Bolivia; she is the “Mamita” of all people. She is the Patroness of Bolivia. Copacabana is one of the oldest Marian shrines in the Americas.

Our Lady of Copacabana…Pray for Us