“Mondays with Mary” – Our Lady of Andacollo (Chile)

In the latter half of the 16th century, an indigenous Chilean copper miner noticed a small ball of light coming from one of the crevices’ in the mine in which we worked. He also heard the voice of Our Lady. She directed him to a place of “wealth” where he found a statue of the Blessed Virgin Mary made of wood. He was more than likely left behind by soldiers of Spain as they were fleeing an attack in 1549.

The town’s name, Andacollo, could be derived from the term in the Quechua language, Anta-Goya, which means, “copper queen”, since the region is filled with a plethora of copper. A secondary belief is that the town is actually referring to Our Lady’s appearance to the miner, where she said his name and told him to go out from there, “Anda, Collo.”

It’s not for certain that the town is named in Our Lady’s honor, nevertheless, she arrived and has remained for centuries. As you have read in all of these articles on Marian shrines, countless miracles have occurred on these sites – Andacollo is no different. The greatest miracle would be the intercession and rescue by the Blessed Mother of the town in 1871 from a smallpox epidemic that had spread through the area. In recent memory, in 2010, the people of the town have attributed Our Lady’s intercession to the divine rescue of 33 trapped miners. 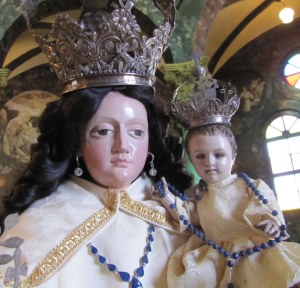 The original image disappeared sometime in the 17th century, however, the image that is in the Basilica of Our Lady of Andacollo, is a copy of the original. The replica has been in a variety of churches over the centuries.

The statue of Our Lady of Andacollo was crowned solemnly on December 26, 1901, by a decree of the Holy See during the pontificate of Pope Leo XIII. Two years before, in 1899, Carinal Mariano Rampolla de Tindaro, in association with degree of 1901, acknowledged that the image would be “crowned with a crown of gold.” In 1900, the Claretian priests, who took over care for the sanctuary, implemented the 1899 decree.

The majestic jewelers were paid for through local fundraising. The jewels that decorate, “Chinita,” the term for Virgin, and Child Jesus were entrusted to Maison Biais in Paris, France. To this day, the Blessed Virgin Mary attracts thousands of pilgrims to the site of Andacollo, most especially on her great feast – five days in length beginning on December 23.

Our Lady of Andacollo…Pray for Us