Marching for the Unborn

Today marks the day when hundreds and thousands of people from across this great nation, and a large percentage of them representing the youth, march on the streets of Washington, D.C. from the National Mall to the Supreme Court in defiance of the treacherous and unjust Supreme Court decision known as Roe v. Wade.

As people of life, we find ourselves again on the defensive since the House of Representatives has been taken back by the Democrats and the Culture of Death. There are good people in the House that represent our Gospel of Life views, but we must stay diligent and continue to fight through our words, our financial means, and in two years, through the ballot box.

We must also hold the Republicans accountable for breaking their promise when they did not defund the malevolent organization of Planned Parenthood, even though they held the power to do so these past two years. Allowing tax payers money to go to this poisonous organization is appalling. We must continue to take the fight to all of them, a fight not of physicality, but one of intelligence and reason using faith and science. 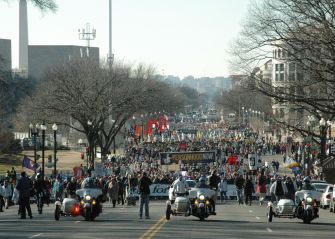 March for Life 2009 – I was in that crowd as a graduate student at Franciscan University of Steubenville.

This day and the protection of the Unborn has always been an important topic for me over the years. I have written on the topic numerous times in the past.  I encourage you to read these posts, if you haven’t done so already –

March for Life 2013 – Standing Up For Life and Humanity

I also want to draw your attention to the soon to be released film (March 29, 2019) about Abby Johnson’s decision to leave Planned Parenthood titled, Unplanned.  There are many videos and interviews online you can view and share on your social media sites. Below is a quick 1-minute video talking about the film.

Tagged as: Culture of Death, Gospel of Life, It's Time to tell the mainstream media why we march, March for Life, Party of Death, Pro-Life is Pro-Science, Protect the Unborn, Standing up for Life, Unplanned, Why We March