Reflections on Blessed John Paul II from the JP 2 Generation

I wrote this initially on October 22, 2011 on the first official feast day of Blessed John Paul II. It was on another blog that I was writing for at the time. I have updated parts of it as I see fit.

Today we celebrate the first feast day of Blessed John Paul II. As I write this post, I am sitting in the Toyota Dealership Service Reception Area waiting for the brakes on my 4 Runner to be repaired. The television show Extreme Makeover is on the flat screen television in front of me, but I am listening to the words and singing of Blessed John Paul II on my IPOD. The album is from Pope John Paul II’s CD from the mid 90’s – Abba Pater.

If I really took the time to write what his life meant to me and how much his theology and philosophy impacted me, it would take me many days to write (I am actually giving a talk on his life on April 16, 2012 at the Texas State University Catholic Center). Blessed John Paul II has impacted so many people my age that WE ARE THE JP 2 GENERATION. Robert Kloska, a fellow Pole of Blessed John Paul II, and my young adult leader sparked my interest in Pope John Paul II when I was 19 years old. It was “BK” who first showed me the Holy Father and from there leading me into studying Philosophy and now Theology. My faith and the learning and practicing of it can be traced back to Blessed John Paul II and Robert Kloska – the first is a saint and the latter will be a saint.

I was blessed three times in my life to see Pope John Paul II. The first time was September 14, 1987 (Exultation of the Cross) when he visited Phoenix, Arizona. I went to the Papal Mass with my Mom and my cousin, Johanna. 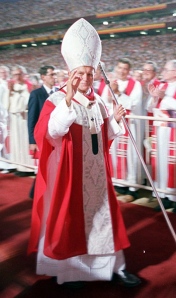 I was able to attain tickets from my parish because I was an altar server at the time. Our seats were very good. They were located on the south 30-yard line and the main sanctuary was in the south end zone of the football stadium at Arizona State University. I remember my Mom had tears in her eyes. I still have the commemorative poster from his visit. It’s framed and hanging in my apartment.

The second time I saw him was at World Youth Day 1993 in Denver, Colorado. I remember being in the rafters of Mile High Stadium with our young adult group from St. Maria Goretti (one of the young adults on that trip is now a priest for the Diocese of Phoenix – Fr. Pete Rossa). To this day I can recall the military helicopters flying over the stadium. Moments later, Pope John Paul II came into the stadium riding in the Pope Mobile. The Pope Mobile made a lap around the stadium, parked, and then the opening ceremonies began. Just thinking about it now brings tears to my eyes. We went crazy and were screaming at the top of our lungs for him. It was an amazing experience! The entire World Youth Day experience was great because you were able to witness so many young people from around the world there to see Pope John Paul II, the Vicar of Christ. It really showed me the Universality of the Church for the first time.

The third time I saw him was at World Youth Day 2000 in Rome, Italy. I was the Director of Youth Ministry at St. Thomas Aquinas Catholic Church in Litchfield Park, Arizona at the time. There were 22 of us on the pilgrimage which first visited Turin, Italy. The group consisted of teenagers from the parish, a few adult chaperones and our Pastor, Fr. Kieran Kleczewski. The group also included my sister and her friend from college. It was by far the best experience seeing him out of the three times, because I was close to him twice and my sister was with me on the trip. I still have a picture of Carla and I from the trip in my apartment. The first time we saw him up close was when the Pope Mobile drove right by our group on the Via dei Fori in the heart of Rome amidst the Roman ruins and the Colosseum. I could have leaned over the railing and the touched the Pope Mobile. We were all in tears (tears of joy!) as he drove by us.

The second time was when we walked to the Vigil Site for the Saturday night prayer service and the closing Mass on Sunday morning. As we were walking in, I remember Carla was right next to me, and the Pope Mobile was right in front of us along with 2 million other people trying to catch a glimpse of the future saint. It was yet another great experience and one that I will cherish for the rest of my life (End of original blog post).

Even now, seven years to the day after his entrance into Eternal Glory and nearly a year after his Beatification, there isn’t a time when I don’t think of him and have tears rolling down my face for I miss him so much. He was truly a beautiful man and one that I will always keep close to my heart. The impact that he has made on Catholicism will be ripple through the Church for centuries. I try to talk about him as much as I can with my high school students for they all were young when he left this vale of tears.  There is no doubt it in my mind that he will be canonized, declared a Doctor of the Church, and given the title of “Great” someday. It’s my hope that when he is canonized, I will be in the City of the Saints to celebrate that festive day.  He truly is the Pope of my generation and I proudly acclaim, I AM THE JP 2 GENERATION!

Blessed John Paul II…Pray for Us!