The Readings for Pentecost Sunday

This past Monday night I led the Bible Study Night at Spirit and Truth here in Austin, Texas. It was not on my calendar until three days before when a friend who helps out with Spirit and Truth contacted me and asked if I could lead the night. Being that it was the last week of school and I already had a short talk planned for Tuesday night on the Blessed Mother, I was reluctant at first, but after thinking about it and realizing that it was Pentecost, I gave my an affirmative answer. Below is an explanation of the readings.

The wind is in reference to the Holy Spirit, just like in the beginning of Genesis. In the RSV, the term for wind is the Spirit of God. Pentecost was a Jewish Feast where all men gathered in Jerusalem for the Harvest Feast where the first loaves of bread from the spring crop were offered to the Lord. It was also the celebration of when God gave the Law to Moses at Mt. Sinai. There are similarities between Mt. Sinai and Pentecost. In both accounts we see wind, fire, and divine power. At Mt. Sinai, the Old Law was received, and at Pentecost, the New Law that Christ established was received. Pentecost is the reversal of Babel from Genesis 11. In Genesis 10, the Table of Nations (the 70 nations that descend from Noah) is given the task to populate the world. However, they refuse and begin to build the Tower of Babel in order to reach heaven (read Genesis 10 & 11). In the end, God confuses their language and they end up not being able to speak to one another.

Now spring forward a few thousand years to Pentecost. The nations that are mentioned in the reading from Acts are the same nations from Babel but with more defined names from the regions around the known world. The Table of Nations from Genesis 10 are now reunited and restored under the Catholic Church (the term catholic would not be used until St. Ignatius of Antioch coins the term in 125 A.D. which means universal, but the Early Church is the Catholic Church) here at Pentecost. All those nations that were divided are now united and restored under the “language” of the Holy Spirit.

Ever since taking a course on the Psalms in graduate school, I have become a great admirer of the Psalms. Psalm 104 is praising the greatness of God in Creation. All of Creation is an act of God’s divine glory. All things on the earth and in the water are God’s creation; even the great sea creatures belong to God. God gives all living things their breath and their food. Breath is important from God for we see it as the Spirit at Pentecost. The Spirit breathed life into the Apostles and Church and we see God’s breath in Genesis 2:7 when God breathed life into man. In verse 31, we read about the “glory of God” and how his creation will endure forever. The psalmist will always praise God and his works by giving his life to the Lord.

As Christians, we say with great conviction and with help from the Spirit, that Jesus is the Lord! This is very distinctive of Christians since Jesus Christ is Our Lord. In this second reading, St. Paul speaks of gifts (Greek – charismata – “grace”). The charismatic gifts are graces that build up the Church. The charisms that we receive are given to us as personal gifts, but should be used for helping with the building up of the Church and her common good. They are not meant to be for our use alone.

When St. Paul says “by one spirit”, he is saying that we are all one body by Baptism. All believers are united to the Body in a metaphysical way. It is through the Sacraments of the Church and the grace that are dispensed from them that help us to be united in Christ and to one another. The Mystical Body of Christ, which all believers are part, finds its soul in the Spirit. The Holy Spirit is that which gives life to the Body of Christ. There is no also distinction among the nations and ethnic groups in the Body of Christ – we are all the same body!

We see that there is an internal battle in the hearts of all Christians between the spirit and the “works of the flesh.” We must try to follow the spirit in all that we do or we will fall and perish to the flesh. To help us fight against the temptations of the flesh, we have been given the gift of God’s grace. Grace, which is given to us in the Sacraments, assists us and gives us the power of God to help us avoid sin. It’s a struggle because we are weak, but it’s possible to overcome these sins.

When we sin mortally, we offend not only Christ, but we are cut off from the Mystical Body. “The fruit of the Spirit” within us helps us to live lives of holiness. By means of the Sacrament of Baptism, we are united in the death of Jesus Christ. It is through his dying on the cross that we are healed (Isaiah 53). Even though sin remains after the Sacrament of Baptism (concupiscence – the inclination to sin), it is through the Sacrament of Reconciliation that we die to our past sins and former way of life. The Spirit gives us new life and strength to overcome our sinful desires.

This reading takes place on the Sunday evening that Jesus resurrects from the dead. After the Resurrection, Jesus is able to simply pass through doors/walls and defy the laws of physics for his humanity is now tied to his divine nature.  He shows them his hands and his side to show them that the body that was crucified days before is his same body. The marks of the crucifixion would be carried into heaven with him on the day of his Ascension. Twice Jesus greets the Apostles with “Peace be with you” – a traditional Hebrew greeting.  When Jesus breathes on the Apostles, it’s the foreshadowing of the day of Pentecost when the Holy Spirit would breath life upon the Apostles. There are a few other times in Scripture when life was breathed into man, such as when God breathed life into Adam in Genesis.

At the conclusion of this reading, we see what the Council of Trent declares as the institution of the Sacrament of Reconciliation. In this episode, Jesus gives the Apostles the power to forgive sin by retaining and loosing sins through the authority of Jesus Christ. There are other scripture verses that speak of this same notion, most notably, Matthew 16, when Jesus declares Peter as the head of the Church. 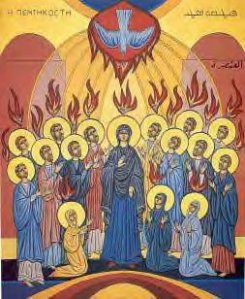