Saints Peter and Paul – Apostles and Pillars of the Christian Church

Today is the Solemnity of Saints Peter and Paul, Apostles and two great pillars of the Christian Church. In Acts of the Apostles, we read about these great saints of the Christian Church. The first twelve chapters of Acts focus on Peter and chapters 13-28 focus on Paul. Acts of the Apostles was written by St. Luke the Evangelist, as the second part of his great work written to Theophilus. His Gospel is part one. 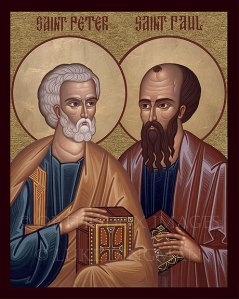 Let ‘s take a look at these two pillars of the Church one by one and then we will examine how they are similar in their teachings and actions in Acts.

St. Peter was a Galilean fisherman with Sts. James and John on Lake Gennesaret (also known as the Sea of Galilee and Sea of Tiberius). The defining moment for Peter is in Matthew 16:16-20. Jesus asks, who do you say that I am? Peter responds, “You are the Christ.” Jesus then changes his name from Simon to Cephas, which translates into “rock” (Aramaic) and Petros (Greek).

First, as rock, Peter is now the foundation of the Church. He is the rock on which the Church would be built upon and stands for centuries. Karl Adam in his book, The Spirit of Catholicism says, “Peter’s confession assures Him that Simon will be an imperishable “rock” for His Church. He is certain of the imperishableness of the Church. It will never perish, since it will always be a Church founded on a rock. There will always be a living Peter, whose faith will confirm his brethren. It lies at the basis of His words that His Church will never be without that strong foundation which He gave it at Caesarea Philipp, because its continuance depends upon this foundation.”

Second, he is given the keys to the kingdom of God. He is now the leader and Christ’s representative on earth. St. Peter is the New Prime Minister for the New Davidic Kingdom. In the Davidic Kingdom in the Old Testament, the king appointed one man from his viceroys to be the primary individual in charge of the others. Essentially, this man was the Prime Minister of the kingdom. When the king was not present in the kingdom, the Prime Minister would stand in for him. The Prime Minister would hold keys of the kingdom around his neck for protection. St. Peter now becomes the Vicar of Christ. This is still a term that we use to describe the Pope today. The vicar is one who stands “in the person of” and possesses the authority of the king. In the case of St. Peter and Jesus Christ, Peter is given the keys to the kingdom and now possesses the authority of Jesus Christ on earth.

Thirdly, St. Peter is given authority to make decisions for the Church – to bind and to loose. The Primacy of Peter is the authority of Christ given to St. Peter and his successors, the popes. The Pope that sits in the Chair of St. Peter has full, supreme, and universal authority over the entire Church. The Papacy is the Church’s highest moral and doctrinal authority. The Holy Father has final word on matters of faith and morals and speaks with infallibility on such matters. Pope Benedict XVI says, “Let us pray that the Primacy of Peter, entrusted to poor human beings, will always be exercised in this original sense as the Lord desired, and that its true meaning will therefore always be recognized by the brethren who are not yet in full communion with us” (The Apostles).

Saint Peter died a martyrs’ death by crucifixion in the year 64 A.D. under the Roman Emperor, Nero. He requestedthat he be flipped upside down on the cross since he did not think he was worthy to die the same way that Jesus died. His remains are buried under the main altar of the basilica that bears his name in Rome on the Vatican hill.

St. Paul, also known as Saul was born around 5 A.D. in the seaport of Tarsus, which is now in modern day Turkey. As did many men of the time, he had two names. Saul was his Jewish name and Paul was his Roman name. Many men of the time had two names for they would use their Roman name when doing business as merchants or fisherman in the Roman Empire and their Hebrew name when they were with family or in synagogue.

At first, St. Paul, as a Pharisee, was a persecutor of the Early Church Christians and was present at the martyrdom of St. Stephen, the first martyr of the Christian Church. On the road to Damascus, he saw a vision of Jesus asking him, “Why do you persecute me?” After recovering his sight, he was baptized as a Christian (Read Acts 9). Pope Benedict XVI says, “He realized that a new approach in his life was absolutely essential…Paul, therefore, no longer lives for himself, for his own justice. He lives for Christ and with Christ: in giving of himself, he is no longer seeking and building himself up” (The Apostles).

After his conversion, Paul was unique and qualified to bring the Gospel to the Gentiles. He is known as the “Apostle to the Gentiles.” As a child and young man in Tarsus, St. Paul received an excellent classical (Greek) education and in Jerusalem, under Rabbi Gamaliel, Paul received the best Jewish education. As a trade, he learned tent making. This helped him later on in life and supported his three missionary trips through Greece and Asia Minor.

When bringing the Gospel to the Gentiles, he was gifted first, because of his classical education; St. Paul had the great ability to speak to Romans and Greeks in ways they could understand. Second, he was well trained in philosophy and logic, which assisted in him in explaining the Christian doctrine more effectively. Third, his knowledge of the Old Testament Scriptures was vast and this aided him when counter arguing points brought up by the Jewish leaders and elders. Lastly, his Roman citizenship, which he received at birth since his parents were freed under Mark Anthony, protected him from those who wanted to kill him.

Saint Paul died a martyrs’ death by being beheaded in the year 64 A.D. under the Roman Emperor, Nero. Since he was a Roman citizen, beheading was the main execution of death. Crucifixion was only for slaves and criminals that were not Roman citizens. He was beheaded along the Via Ostiense at Tre Fontane, outside the walls of Rome. It is believed that his remains are buried in the basilica that bears his name.

Some will argue that Saints Peter and Paul were at odds with one another and did not get along. However, if you carefully read Acts of the Apostles, you will find that’s hardly the case. Saints Peter and Paul preached the same Gospel message. St. Luke is saying that Peter and Paul are tight. Both of these men through the power of the Holy Spirit raised people from the dead. The apostles are not divided in their preaching. We see a clear continuity of doctrine between Saints Peter and Paul. The only thing that differs is the theme of redemptive suffering is different in Paul than in Peter. In Acts 14:22; St. Paul says that through tribulations we will enter the kingdom of God. The tribulations will be a means to our salvation. We walk in holiness through the cross.

As we continue in this Fortnight for Freedom, let us ask for the intercession of Saints Peter and Paul. These two great pillars whom so willingly offered their lives for Jesus Christ and his Church.

Saints Peter and Paul…Pray for Us!

Tagged as: Apostle to the Gentiles, Fortnight for Freedom, Primacy of Peter, Saint Paul, Saint Peter, Solemnity of Saints Peter and Paul, Vicar of Christ