“The Apostle of Common Sense”

Today we commemorate the 77th anniversary of the death of “the Apostle of Common Sense” – Gilbert Keith Chesterton.  In a time when the world needs more common sense than ever before, we should be reading this prolific and prophetic writer as one drink’s cold water during the summer months in the Arizona desert.

With the outbreak of political correctness, the redefining of marriage, and the “protection of individual rights”, Chesterton and his straightforward wit and intellect is greatly needed to remedy the disease of the Neo-pagan, individualistic, relativistic and secular post-Christian culture we now reside. Reading him will allow us to combat the idiotic tendencies of the Kool-Aid drinking sheep that now live next door to us.

I was first introduced to the man while studying as an undergrad in the Saint Ignatius Institute at the University of San Francisco. My first engagement with him was reading the book, The Everlasting Man, in the course, Revelation and Christology, which was taught by a theological giant – Reverend Joseph Fessio, S.J.

If you have never read Chesterton before, I suggest the title – G.K. Chesterton – The Apostle of Common Sense by Dale Ahlquist. The book provides an excellent overview of Chesterton’s writings. You can also head over (only after you have finished reading this post) to Brandon Vogt’s website. He is giving away some of Chesterton’s writings today to honor the inexhaustible writer. If those are not enough for your inquisitive minds, check out the American Chesterton Society.

So where does the understanding of common sense derive from in G.K. Chesterton’s writings? In one of his most important books and the most neglected (Heretics), he says, “We who are Christians never knew the great philosophic common sense which inheres in that mystery until the anti-Christian writers pointed it out to us.” According to Chesterton, the Christian faith (and in the end particularly Catholicism) is common sense.

The complete lack of common sense lies within a heresy. Heresies are half-truths that are exaggerated “at the expense of the rest of the truth.” Catholicism sees a heresy as not just a false doctrine, but also really an incomplete doctrine. Heretics reject part of the truth and then attack the greater segment of the truth. They are incomplete in their thought process. Dale Ahlquist says, “The reason why Chesterton is an apostle of common sense is that he is a complete thinker. The reason he could recognize heresy is because he could expose incomplete thinking.”

As we receive news at the rapid rate that we do today via technology, we come to know the lack of complete thinking that exists among many of our current media related people because they are driven by an agenda that seeks to destroy the common good and the beauty of the human person by a punch of their keyboard. However, its not just modern journalists that are inebriated in this thought process, but it’s also the modern man. In his book, Orthodoxy, Chesterton focuses at one point on the importance of faith and reason. He argues that the modern man has lost the capacity of intellectual thought and in turn as lost common sense. Sound familiar? It’s as if he is writing these words today.

As much as I would love to provide you with a complete overview of G.K. Chesterton, there is no way on God’s green earth that’s possible at this time. If I chose to take on such an endeavor, I would be sitting at my kitchen table “come Rapture” (Shawshank Redemption). 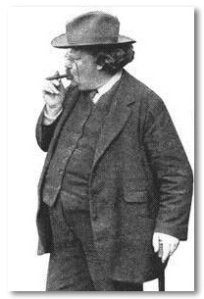 If there was ever a quotable person in the history of the world, it’s G. K. Chesterton. It’s my hope that this post has inspired you to seek out the greatest Catholic writer of the 20th century (my informed opinion of course) and to read him in order to become a complete thinker in an age of incomplete minds. Chesterton says…

“Religious liberty might be supposed to mean that everybody is free to discuss religion. In practice it means that hardly everybody is allowed to mention it.” – The Collected Works of G.K. Chesterton

“Poetry is sane because it floats easily in an infinite sea; reason seeks to cross the infinite sea, and so make it finite…The poet only asks to get his head into the heavens. It is the logician who seeks to get the heavens into his head. And it is his head that splits.” – Orthodoxy

“The Christian ideal has not been tried and found wanting. It has been found difficult; and left untried.” – What’s Wrong with the World

The moderns have created a worship of sex “which exalts lust and forbids fertility.” – The Well and the Shallows

Speaking on Marriage (of course between a man and woman) and Catholicism – “The religion that holds it most strongly will hold it when nobody else holds it.” – The Superstition of Divorce

Eugenicists and the wrong idea of medicine: “We call in the doctor to save us from death; and, death being admittedly an evil, he has the right to administer the…most recondite pill which he may think is a cure for all such menaces of death. He has not the right administer death as the cure for all human ills.” – Eugenics and Other Evils

“There cannot be a stiffer piece of Christian divinity than the divinity of Christ.” – St. Thomas Aquinas