My fascination with Eastern Catholicism began on Pentecost Sunday 2010 when I first attended Our Lady’s Maronite Catholic Church in Austin, Texas with the Weis Family. At the time, I was teaching high school theology at St. Dominic Savio Catholic High School and had three of the Weis girls in one of my classes. They knew I was interested in attending a Divine Liturgy. Along with their parents and younger brother, they invited me to attend. The Weis Family became good friends and occasionally invited me over for dinner to eat Middle Eastern food.

At first, I was like a deer in the headlights! The Divine Liturgy of the East is very different than what Roman Catholics experience each week at Holy Mass. After Pentecost Sunday, I found myself attending the Maronite Church once a month or so. The more I went, the more I loved it! Since moving back to Phoenix, I have attended St. Joseph’s Maronite Catholic Church, St. Stephen’s Byzantine Cathedral, and the Melkite Church, St. John of the Desert.

At this point, you might be asking yourself the question – Why is a Roman Catholic attending Eastern Catholic Churches?

“…I listen to the Churches of the East, which I know are living interpreters of the treasure of tradition they preserve. In contemplating it, before my eyes appear elements of great significance for fuller and more thorough understanding of the Christian experience…the Christian East has a unique and privileged role as the original setting where the Church was born…Tradition is the heritage of Christ’s Church…Tradition is never pure nostalgia for things or forms past, nor regret for lost privileges, but the living memory of the Bride, kept eternally youthful by the Love that dwells within her.”

If those words aren’t enough for you, let’s continue on with our catechesis from the future saint. Even though these next words were particularly stressed for the reconciliation of the Catholic Church and the Orthodox Churches, they can still be applied here since Eastern Catholicism associated itself with the Orthodox for many years after the Great Schism of 1054. In his Encyclical, Ut Unum Sint (On Commitment to Ecumenism), Blessed John Paul II says,

“In this perspective an expression which I have frequently employed finds its deepest meaning: the Church must breathe with her two lungs! In the first millennium of the history of Christianity, this expression refers primarily to the relationship between Byzantium and Rome…the vision of the full communion to be sought is that of unity in legitimate diversity.”

Still remaining unique in their respective traditions and rites, the Church must breathe with her two lungs! As a Roman Catholic, I have taken this call from John Paul II upon myself and attend the Eastern Rites of the Catholic Church while still attending the Roman Rite.

While attending the Melkite Church a few weeks back, I decided to attend the upcoming Solemnity of the Assumption of the Blessed Virgin Mary in both the East and West.  It was the perfect opportunity to literally breathe with the two lungs of the Church.

On Wednesday night, August 14, I attended the Divine Liturgy at St. Stephen’s Byzantine Cathedral. The words sacred, beautiful, and mystical don’t give the actual liturgy the justice it deserves. Before the Divine Liturgy began, we prayed Vespers, prayers from the Psalms that speak of God’s great glory. I am still learning the parts of the liturgy so my assessment and reflection is not yet complete. 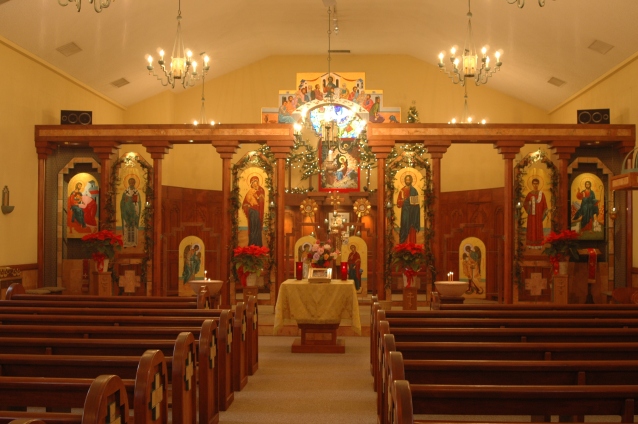 The entire liturgy, like always, was chanted. You chant the whole liturgy…it’s amazing!! The Blessed Mother was mentioned at least 5-10 times. There were 5 Scriptural Readings – 3 from the Old Testament and 2 from the New Testament, including the Gospel. The hymns teach you the faith since they are rooted in Sacred Scripture and Sacred Tradition. The homily was superb and focused on the scriptural readings and the explanation of the Dormition of the Theotokos and Ever-Virgin Mary.

During the consecration, the priest’s were Ad Orientem – “facing eastward.” As the priest should, he is offering the sacrifice of the liturgy facing the crucifix and offering it to God. The incense was so great that I actually felt it enter my throat and descend into my lungs helping me to breathe better throughout the liturgy.

Last night, August 15, I attended Holy Mass at the Catholic Newman Center located on the campus of Arizona State University. As always, when Reverend Rob Clements celebrates the Mass, it’s going to be sacred and reverent. The sacred space is brand new and still does not have much catholic art or statues, but it’s a beautiful space nonetheless. Once complete, it will be one of the most beautiful places to pray in Phoenix.

What really helped me breathe last night was the music that accompanied Holy Mass. The organ is often the main instrument at the Masses I have attended in the past, but last night they had an all male choir singing in both English and Latin. The music along with the sacredness of the liturgy lifted me into Heaven. It was blessing to attend such a beautiful and reverent Latin Rite liturgy.

If you are a Roman Catholic and have never been to an Eastern Divine Liturgy, I have one word for you – GO!! You may be a deer in the headlights at first, but keep going to learn the importance of the East in relation to the West.

To conclude, I give you the Second Vatican Council Decree on Ecumenism, Unitatis Redintegratio, which states,

“The very rich liturgical and spiritual heritage of the Eastern Churches should be known, venerated, preserved and cherished by all. They must recognize that this is of supreme importance for the faithful preservation of the fullness of Christian tradition, and for bringing about reconciliation between Eastern and Western Christians.”

Let us pray for the works of Blessed John Paul II, Pope Emeritus Benedict XVI, and now Pope Francis; that through their Papacies the Catholic Church and Orthodox Churches can reconcile their differences and be united as one yet again.  Amen.