The Queenship of Mary: Advocate, Co-Redemptrix, and Mediatrix

The Second Vatican Council in the document, Lumen Gentium – the Dogmatic Constitution on the Church, declares in Chapter VIII,

“Taken up to heaven she did not lay aside this salvific duty, but by her constant intercession continued to bring us the gifts of eternal salvation. By her maternal charity, she cares for the brethren of her Son, who still journey on earth surrounded by dangers and cultics, until they are led into the happiness of their true home. Therefore the Blessed Virgin is invoked by the Church under the titles of Advocate, Helper, Benefactress, and Mediatrix. This, however, is to be so understood that it neither takes away from nor adds anything to the dignity and efficaciousness of Christ the one Mediator” (#62).

When Jesus gives Our Lady to John on Calvary at the foot of the Cross, Mary becomes from that point forward the spiritual mother of all humanity (Jn 19:26-27). John, the “beloved disciple”, takes Mary into his own home and cares for her as if she is his own mother. If Jesus had brothers and sisters, as modern biblical scholarship claims, then they would have taken care of Mary after Jesus’ death on the cross. However, that does not happen because Our Lord did not have biological brothers and sisters.

For more on Mary as Queen Mother see the blog posts  – The Visitation of the Blessed Mother and The Magnificat. We also see Mary’s Queenship portrayed in Revelation 12:1. Our Lady has the moon under her feet and she is wearing a crown with twelve stars. Her son happens to be the King who will rule all nations and she will take her thrown next to him (cf. Rev 12:5).

Second, the question usually asked is – how does the Mother of God mediate? Now that she resides in Heaven through her Assumption, the Blessed Mother mediates in her unique role with Jesus in Redemption as Co-Redemptrix. The term “co” is not to be equal with God. In 1 Corinthians 3:9, St. Paul says that we are co-workers with God. With God, we assist as co-workers, but are never equal to God. We are always subordinate to Him. The same happens to be true for Mary. She is always subordinate to God, but works as Co-Redemptrix with Jesus in the Redemption of humanity.

This is not an honorary title, but a function of the Church. Simeon’s Prophecy in Luke 2:35 speaks of Mary’s soul being pierced with a sword. This piercing leads her to Calvary with Jesus. As Christ suffers; so does his Mother suffer.

Lastly, her role as one who dispenses graces, Mediatrix, flows from her role as Co-redemptrix. She is able to dispense grace because she actively participates in receiving the graces of Redemption with and under Jesus, but is not the source of grace. 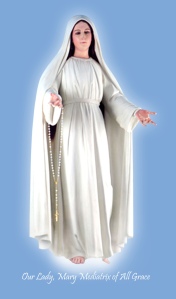 Through her Immaculate Conception, she acquires the grace of Redemption by Jesus Christ and is able to dispense grace to all of humanity through her role as our spiritual mother. She feeds the faithful the spiritual gifts through Christ’s body in the order of grace. Her function as spiritual mother is fundamental in her ability to distribute the graces of Redemption.

There are a few scriptural references that refer to Mary acting as Mediatrix, however, the one I want to focus on is John 2:1-10, The Wedding Feast at Cana.

Icon of The Wedding Feast of Cana

Mary is Mediatrix of All Graces here because she directs and gives a specific mediation to the situation at hand, “they have no wine.” She is willing and interceding for the grace of Jesus Christ at Cana. The last recorded words of Mary in the Gospels, “do whatever he tells you”, gives us the ultimate end of Mary. As the Mother of Jesus, she will intercede for all nations and people in order to bring them closer to her Son, who might then dispense the miraculous graces needed for salvation.

Even though this doctrine as not been declared dogmatic, many theologians, Popes, and the Second Vatican Council have taught extensively on it. In recent years, Blessed John Paul II referred to Mary as Mediatrix of All Graces on eight different occasions and Pope Emeritus Benedict XVI has stated that she is Mediatrix of All Graces, which includes the Seven Sacraments of the Church.