Pope St. John Paul II on the Queenship of Mary

Everyone that has ever really taken the time to listen or read Pope St. John Paul II will know that his love for the Blessed Mother began in his youth, after the passing of his own mother. He put his trust in her as Advocate and never looked back. Pope St. John Paul II is on the cusp of being canonized a saint. Here is the Polish saint speaking about the Queenship of Mary from 1997 –

“Popular devotion invokes Mary as Queen. The Council, after recalling the Assumption of the Blessed Virgin in “‘body and soul into heavenly glory’”, explains that she was “exalted by the Lord as Queen over all things, that she might be the more fully conformed to her Son, the Lord of lords (cf. Rv 19:16) and conqueror of sin and death” (Lumen Gentium, n. 59).

In fact, starting from the fifth century, almost in the same period in which the Council of Ephesus proclaims her “Mother of God”, the title of Queen begins to be attributed to her. With this further recognition of her sublime dignity, the Christian people want to place her above all creatures, exalting her role and importance in the life of every person and of the whole world.

But already a fragment of a homily, attributed to Origen, contains this comment on the words Elizabeth spoke at the Visitation “It is I who should have come to visit you, because you are blessed above all women, you are the Mother of my Lord, you are my Lady” (Fragment, PG 13, 1902 D). The text passes spontaneously from the expression “the Mother of my Lord” to the title, “my Lady”, anticipating what St John Damascene was later to say, attributing to Mary the title of “Sovereign”: “When she became Mother of the Creator, she truly became queen of all creatures” (De fide orthodoxa, 4, 14, PG 94, 1157)…In looking at the analogy between Christ’s Ascension and Mary’s Assumption, we can conclude that Mary, in dependence on Christ, is the Queen who possesses and exercises over the universe a sovereignty granted to her by her Son.

The title of Queen does not of course replace that of Mother: her queenship remains a corollary of her particular maternal mission and simply expresses the power conferred on her to carry out that mission. 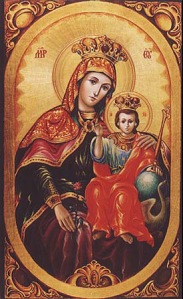 Citing Pius IX’s Bull Ineffabilis Deus, the Supreme Pontiff highlights this maternal dimension of the Blessed Virgin’s queenship: “Having a motherly affection for us and being concerned for our salvation, she extends her care to the whole human race. Appointed by the Lord as Queen of heaven and earth, raised above all the choirs of angels and the whole celestial hierarchy of saints, sitting at the right hand of her only Son, our Lord Jesus Christ, she obtains with great certainty what she asks with her motherly prayers; she obtains what she seeks and it cannot be denied her” (cf. AAS 46 [1954] 636-637).

Therefore Christians look with trust to Mary Queen and this not only does not diminish but indeed exalts their filial abandonment to her, who is mother in the order of grace.

Indeed, the concern Mary Queen has for mankind can be fully effective precisely by virtue of her glorious state which derives from the Assumption. St Germanus I of Constantinople, highlights this very well. He holds that this state guarantees Mary’s intimate relationship with her Son and enables her to intercede in our favour. Addressing Mary he says: Christ wanted “to have, so to speak, the closeness of your lips and your heart; thus he assents to all the desires you express to him, when you suffer for your children, with his divine power he does all that you ask of him” (Hom. 1 PG 98, 348).

One can conclude that the Assumption favours Mary’s full communion not only with Christ, but with each one of us: she is beside us, because her glorious state enables her to follow us in our daily earthly journey. As we read again in St Germanus: “You dwell spiritually with us and the greatness of your vigilance over us makes your communion of life with us stand out” (Hom. 1, PG 98, 344).

Thus far from creating distance between her and us, Mary’s glorious state brings about a continuous and caring closeness. She knows everything that happens in our life and supports us with maternal love in life’s trials.

Taken up into heavenly glory, Mary dedicates herself totally to the work of salvation in order to communicate to every living person the happiness granted to her. She is a Queen who gives all that she possesses, participating above all in the life and love of Christ.”