8 Things You Need To Know About Saint Gerard Majella

1. Gerard was born at Muro, Italy, in 1726 and joined the Redemptorists at the age of twenty-three.

2. In 1752, Saint Alphonsus Liguori professed him a lay brother.

3. As a Redemptorist, he served as a tailor, porter, gardener, infirmarian, and sacristan.

4. He had the spiritual gifts of reading consciences as well as levitation and bi-location.

5. He was humble man who lived a life of great piety and was a great example of obedience and charity for his fellow brothers.

7. He is the patron saint for expectant mothers and women who suffer with pain during childbirth.

8. The National Shrine of Saint Gerard Majella in the United States is in Saint Lucy’s Catholic Church in Newark, New Jersey. 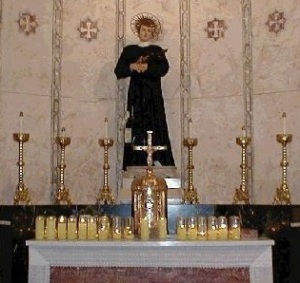 My parents were married forty-one years ago in Saint Lucy’s Catholic Church. My younger sister and I were both baptized in the Baptismal Font in the Shrine of Saint Gerard.

If you happen to be in the North New Jersey region from today to Sunday, you can attend the 114th Annual Saint Gerard Feast. I remember going to the feast as a young boy when we still lived in New Jersey.

This blog post is dedicated to the entire Perna and Tino Families, those here on Earth and those in the Heavenly Kingdom of God.

Saint Gerard Majella…Pray For Us!