Today, October 25, we now commemorate another great event in the life of Pope John Paul II. It was today, thirty-five years ago; we received his first General Audience on a Wednesday. The Wednesday Audiences’ would become a staple in the pontificate of Pope John Paul II. It would be through these audiences that we would receive many wonderful messages as well as hear the Theology of the Body for the first time.

I present to you excerpts from very first Wednesday Audience from the soon-to-be Saint, Blessed Pope John Paul II. If you want to read the entire text go here. The emphasized points in red are mine. If you choose you to repost this on Facebook or Twitter, please use the hashtag – #StJohnPaul2. 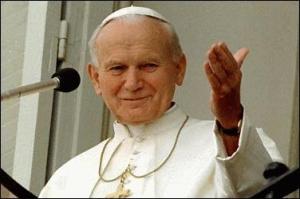 “Today John Paul II presents himself to you, for the first time…He wishes to carry on with the subjects already started by John Paul I. We remember that he spoke of the three theological virtues: faith, hope and charity. He ended with charity. As St Paul teaches (1 Cor 13: 13), charity—which constituted his last teaching—is the greatest virtue here on earth; it is the one that crosses the threshold of life and death. For when the time of faith and hope ends, love continues…”

“…John Paul I wished to speak of the “seven lamps” of the Christian life, as Pope John XXIII called them. Well, today I wish to continue this plan, which the late Pope had prepared, and to speak briefly of the virtue of prudence. The ancients spoke a great deal of this virtue. We owe them, for this reason, deep gratitude and thanks. In a certain dimension, they taught us that the value of man must be measured with the yardstick of the moral good which he accomplishes in his life. It is just this that ensures the virtue of prudence first place. The prudent man, who strives for everything that is really good, endeavours to measure every thing, every situation and his whole activity according to the yardstick of moral good. So a prudent man is not one who—as is often meant—is able to wangle things in life and draw the greatest profit from it; but one who is able to construct his whole life according to the voice of upright conscience and according to the requirements of sound morality…”

“But the Christian has the right and the duty to look at the virtue of prudence also in another perspective. It is, as it were, the image and likeness of the Providence of God himself in the dimensions of concrete man. For man—as we know from the book of Genesis—was created in the image and likeness of God. And God carries out his plan in the history of creation, and above all in the history of mankind. The purpose of this plan is—as St Thomas teaches—the ultimate good of the universe…”

“I pray in order that, in this light, those who are listening to me will think now of their own lives. Am I prudent? Do I live consistently and responsibly? Does the programme I am realizing serve the real good? Does it serve the salvation that Christ and the Church want for us? If a boy or girl student, a son or a daughter, is listening to me today, let such a person look in this light at the homework, reading, interests, pastimes, the circle of friends, boys and girls. If a father or a mother of a family is listening to me, let such a person think a little of the conjugal and parental commitments. If a minister or statesman is listening to me, let him look at the range of his duties and responsibilities. Is he pursuing the real good of society, of the nation, of mankind? Or only particular and partial interests? If a journalist or publicist is listening to me, one who exercises an influence on public opinion, let such a person reflect on the value and purpose of this influence.

I, too, who am speaking to you, I the Pope, what must I do to act prudently…What, then, must the new Pope do in order to operate prudently? Certainly he must do a great deal in this direction. He must always learn and always meditate on these problems. But in addition to this, what can he do? He must pray and endeavour to have that gift of the Holy Spirit which is called the gift of counsel. And let all those who wish the new Pope to be a prudent Pastor of the Church, implore for him the gift of counsel. And for themselves, let them also ask for this gift through the special intercession of the Mother of Good Counsel…”