Standing Up to Fight for Life and Humanity 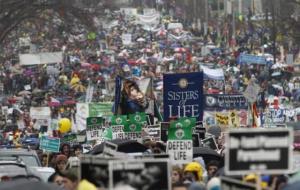 Today, hundreds of thousands will gather in Washington, D.C. for the March for Life, and on Saturday, ten of thousands will gather for the Walk for Life West Coast in San Francisco, CA. The Main Stream Media (composed of liberals who promote tolerance and justice, unless of course you disagree with them – see Andrew Cuomo’s comments from last week) will not cover either event, however, their avoidance of not choosing to report about these two events will not stop us from gathering to defend the importance of human life, which begins at conception.

We now have entered the 41st year of this war on abortion. The battle lines have been drawn and the ranks just continue to grow on the Pro-Life front. The numbers have not decreased, as some wish they would, but they have doubled, tripled, and even quadrupled over the years. Trust me my friends, this is a war and it is between good and evil. Let’s not forget the venomous and vile behavior we all witnessed from the hateful individuals in Texas who shouted, “Hail, Satan!”

The Culture of Death, a phrase coined by the soon to be Pope Saint John Paul II, is seeking to destroy all that is good and beautiful about the human person. As Christians, we must rise up and defend human life from conception to natural death. We must stand for marriage between one man and one woman, we must fight against the evils of contraception, in-vitro fertilization, cloning, stem-cell research that destroys human embryos, and child abuse. In the end, we must fight for the very good of humanity itself!

The Culture of Death is not just about Abortion, but it envelops all the forces of destruction that I have mentioned, which in the long run seek to destroy today’s civilization. These evils will only continue to disrupt and demonize humanity in the years to come. We can see it currently with the destruction of the traditional family, the great strife in relationships, and the annihilation of the glory of the human person.

With 56 million children dead – I say enough is enough! We must stand up and fight for the unborn — for the beauty of the human person. Standing up for Life against the evils of Abortion is what we are called to do. It’s our very duty in this time of human history.

“Defense of unborn life is closely linked to the defense of each and every other human right…It involves the conviction that a human being is always sacred and inviolable, in any situation and at every stage of development. Human beings are ends in themselves and never a means of resolving other problems. Once this conviction disappears, so do solid and lasting foundations for the defense of human rights, which would always be subject to the passing whims of the powers that be.”

We are no longer fighting just battles, but it’s an all out war against the Culture of Death. We are not just engaging our fellow humans, who justify Abortion as a “law” or because it’s the easy way out, but we are fighting against the spiritual world as well (See Eph 6:10-18). As Christians, we must “put on the whole armor of God” so that we too can stand against the attacks from the devil. We must gird our loins and engage the battle that is in front of us.

The Culture of Life must be the engaging force against this “present darkness.” With Jesus Christ as our source and summit, it is our fundamental duty as Christians to engage the culture, counteract the culture, and do all that we can to show the Light of the World to the world. Our Lord is not a light that should be kept under a bushel basket, but He is the greatest light, the light brighter than a thousand Suns – Christ is the Light that will pierce the darkness.

Jesus Christ is the Heart – the very Core, of the Culture of Life, for He is Life itself. With Him…all things are possible!