Saint Isidore of Seville – Schoolmaster of the Middle Ages

In 560 A.D., St. Isidore was born in Cartagena, Spain and is the son of Severinus and Theodora, two individuals known for having great virtue. His father descended from a Roman background and was associated with the Visigothic kings. Saint Isidore’s siblings are all saints. Two of his brothers, St. Leander and St. Fulgentius were bishops and his sister, St. Florentina, was an abbess of many convents.

For his education, St. Isidore was entrusted to his much older brother, Leander. Although his brother was a taskmaster when it came to learning, it proved to be a very successful combination since St. Isidore received a great education, was considered one of the greatest minds of his time, and became an ardent educator himself. Even though he was never a monk, there are rules with his name attached to them since he loved religious orders.

After the death of St. Leander, Isidore became the Bishop of Seville around 600 A.D. Continuing the work that he began with his brother; Isidore served the diocese of Seville for thirty-six years. Within Seville, one of the major contributions he completed was the conversion of the Visigoths to Catholicism from Arianism. He also established the discipline for the Spanish church in councils.

The Fourth Council of Toledo was the most important of all the Spanish councils since Toledo was the capital of Spain at the time and the home of the Visigoth kings. Many of the decrees promulgated from the fourth council were instituted by Isidore, most notably was that every diocese in the Church should have a seminary or cathedral school set for education. 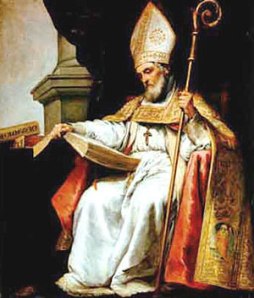 As an educator, Isidore was a man ahead of his time. Instead of just a classical education, he was a proponent who thought education should include all areas of knowledge – liberal arts, law, the languages of Greek and Hebrew, and medicine. He encouraged the philosophy of Aristotle to be taught to all students, well before the Arabs began to teach it. His most important achievement as an educator was the compilation of the Etymologies or Origins, an encyclopedia that brought together all knowledge of the time.

St. Isidore was a voluminous writer. Many of his works include a dictionary of synonyms; a historical treatise that covered the Goths, Vandals, and Suevi; his many rules for monks, dissertations on astronomy and geography; biographies of famous men of the time; a book covering important events in the Old and New Testament; and an all-encompassing work covering theology and ecclesiology. He had a gift with learning languages and knew Latin, Greek, and Hebrew fluently.

At the end of his thirty-six years as Bishop of Seville, realizing that his time this side of Heaven was drawing to a close, he began by giving his money away and offered penitential practices, such as wearing sackcloth and putting ashes on his head. He prayed fervently asking Heaven to forgive him of his sins.

Along with giving his money and possessions to the poor, he also paid back any money that he had borrowed from others. Finally, in the company of two bishops, he received viaticum and entered Heavenly glory calmly in 636 A.D.

In 1722, Pope Innocent XIII declared him a Doctor of the Church. His memorial is today, April 4th.

In 1997, Pope St. John Paul II, decided that the Internet needed a patron saint, he declared that St. Isidore of Seville should be that saint. As of April 2014, the Vatican has not made this official.

Tagged as: Bishop of Seville, Doctors of the Church, Fourth Council of Toledo, Patron Saint of the Internet;, Saint Isidore of Seville, Schoolmaster of the Middle Ages