Saint Anselm – The Father of Scholasticism

In the year 1033 A.D., in the region of Piedmont, Saint Anselm was born. From his earliest years, he was attracted to the life of a monastic, and even applied at the age of fifteen, but was rejected. This rejection pleased his father, a man Anselm never agreed with as a boy. After the death of his mother, he went to study in Burgundy since his father nearly drove him out of the house.

After three years in Burgundy, Anselm traveled to Bec in Normandy where he became a pupil under the great abbot of Bec, Lanfranc. After his teacher and friend, Lanfranc was elevated as abbot to another monastery in the region; at the age of twenty-seven, Anselm became prior of Bec with only three years of experience under his belt as a monk.

Saint Anselm is one of the greatest minds the Catholic Church has ever seen. His thoughts and theology are some of the most original in the Church’s 2000-year history. He outmatched all of the theologians of his time and is known as the “Father of Scholasticism.” He was especially known for his metaphysics, which only compared to that of Saint Augustine. As the abbot of Bec, he penned some of his most famous writings – the Monologion, a treatise on how God exists by using metaphysical proofs, and the Proslogion, a text that focuses on the attributes of God. Along with these two great documents, he wrote many others on truth, freewill, the genesis of evil, and reasoning.

After fifteen years as prior, he was eventually made abbot of Bec. As abbot, he was forced to travel to England from time to time to make visits because the abbey owned possessions there. He enjoyed his travels to England since he was able to visit his friend, Lanfranc, who was now the Archbishop of Canterbury. Three years into that position, his friend died and the see of Canterbury was left open due to pressure from King William Rufus, who claimed financial interest from it. While enduring a rather quick and sudden illness, the king changed his mind and vowed that he would follow the law more efficiently. He also nominated Anselm as Archbishop of Canterbury.

Shocked at the request of the king, Saint Anselm was not prepared for such a nomination because he was not in good health nor did he think he had the proper skills for the position. Nevertheless, the other bishops and clergy forced the crosier into his hand, brought him to the church, and sang a Te Deum, a hymn of praise.

In the end though, King Rufus really didn’t change his heart or mind. After recovering from his illness, he quickly challenged Anselm as Archbishop and demanded supplies be given to him once again. Anselm offered 500 marks but the king sought out 1000 instead, pleading that this was the fee for his nomination to the see of Canterbury. Anselm did not comply!

As the two battled back and forth on a variety of church business, the non-virtuous and greedy monarch tried to remove Anselm from his episcopacy. He even tried to persuade the Holy Father, Urban II, to have him removed, but that was also a futile attempt. On top of the Pope’s rejection of the king, the papal diplomat who brought the news also brought with him the pallium, a sign that Anselm was not going anywhere. 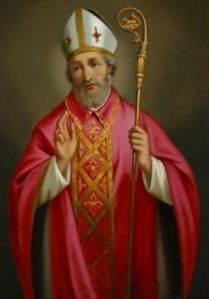 As the dual continued between Saint Anselm and William in regards to the clergy of England, in the year 1097, Saint Anselm finally was given approval to leave the country to discuss his options with the Holy See. He was threatened with exile and losing the financial holdings of Canterbury. After arriving in Rome, he met with the Holy Father who supported him 100 percent and wrote a letter to the King demanding that the possessions be given back to the church immediately.

During his stay in Rome, Anselm was boarded at the Campanian monastery. It was here at this monastery that Saint Anselm wrote his greatest work on the Incarnation of Jesus Christ, Cur Deus Homo (Why God Became Man). Feeling frustrated about his position in Canterbury, he requested that he be removed from his office, but the Pope refused.

Also during his exile, Saint Anselm attended the Council of Bari in 1098. He made himself quite known because he explained eloquently the beauty of the Filioque to the Italo-Greek Bishops in attendance. The council also backed Anselm in regards to his dealings with King William, who was charged with simony, oppressing the Church, and persecuting Anselm. The council was ready to ask the Holy Father to excommunicate the king, but Anselm pleaded them not to make that request. Soon after the council, King Rufus died. The people of England, and the new King, Henry I, greeted Anselm with great excitement and joy.

Just like before, with King Rufus, the “honeymoon” did not last long between Anselm and Henry I. Henry I wanted Anselm to pay him homage and reinvest him to the See of Canterbury. This was now contrary to church law so Anselm refused it. With threats of invasion coming from Robert of Normandy, Henry I did whatever he could to get Anselm and the church on his side. Once the threats were no longer, Henry I sought investiture again.

As Archbishop of Canterbury, Saint Anselm continued to remain steadfast against Henry. He refused to elevate bishops that were nominated by the king, unless they were canonically approved. Both brought their cases to Rome, and like his predecessor, Paschal II, stood with Anselm. As it was with the previous king, Henry tried to exile Anselm and take away the financial holdings of the church, but once he got word that Anselm was going to excommunicate him, he redacted his threats and offered a truce. Sometime later, at a royal council, King Henry enacted a degree that bishops and abbots should be free to do homage for their temporal possessions. Anselm and the Pope concurred.

During his years as Archbishop, he cared for the poor of the city, gave them alms, was in complete opposition of the slave trade, settled many church affairs of his time, and was faithful shepherd of Jesus Christ to the people under his care, despite his poor health.

After many years of obedience to the church always remaining steadfast in her teachings, Saint Anselm died in the year 1109 A.D. with the monks of Canterbury around his deathbed. He was never formally canonized a saint, but is still recognized as one. In 1720, Pope Clement XI declared him a Doctor of the Church. His feast day is April 21.