Saint Bede the Venerable was born in year 672 (673?) A.D. in the area close to Saint Peter and St. Paul monastery in Jarrow, England. As a three-year-old toddler, he was sent to a Benedictine monastery and educated by Abbots St. Benedict Biscop, and then Ceolfrid. In his nineteenth year, he was ordained to the diaconate. In 702 A.D., at the age of thirty, he was ordained a priest of the Benedictine Order. Although he briefly traveled, the majority of his life was spent as a monk living in the monastery.

During his early life, he was found to be with great intelligence and grasped the concepts of philosophy, rhetoric, astronomy, cosmography, with great ease. Along with these subjects, Saint Bede also studied orthography, music, grammar, poetry, hagiography, and literature. He is considered a major influence on the development of the English literature that would follow him in the years to come.

He was a master when it came to history and is known as the “Father of English History” because of his greatest work, Historia Ecclesiastica. The text covers the history of the English people and Church beginning with the raids of Julius Caesar in 55-54 B.C. to the arrival of St. Augustine of Canterbury, a Roman missionary sent by Pope St. Gregory the Great in 596 A.D. It is considered the primary account of early English history. He completed this work in 731 A.D. St. Bede is also credited with distinguishing the events after the life of Christ with the term, anno domini (A.D.). 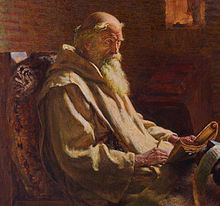 “For if history records good things of good men, the thoughtful hearer is encouraged to imitate what is good; or if it records evil of wicked men, the good, religious reader or listener is encouraged to avoid all that is sinful and perverse, and to follow what he knows to be good and pleasing to God.”

His knowledge did not end with the above subjects but found its culmination in scriptural exegesis. As a monk living in the monastery, St. Bede’s primary focus was the study of the Sacred Scriptures, both in writing and teaching. Although he wrote on many books in the Holy Bible, his best work in this area is his focus on the Pentateuch. He also wrote texts focusing on the Chosen Race, A Royal Priesthood and the nativity accounts found in Luke 1, specifically the Visitation and Mary’s Magnificat.

Since St. Bede is viewed as one of the greatest minds of his time, the term, “the Venerable” was given to him in order to recognize his great mind and wisdom. The Council of Aachen developed this title for him in 853 A.D.

On May 25, 731 A.D., in Jarrow, England, Saint Bede the Venerable entered Heavenly Glory. In 1899, Pope Leo XIII declared him a Doctor of the Church. He is the only Englishman to hold this distinguished title.