“Mondays with Mary” – The Seven Joys of the Blessed Virgin Mary

As the young man was prayerfully engaged in this new devotion, after Our Lady appeared to him, his Novice Master witnessed him and saw a vision of an angel weaving a wreath of 10 roses. After each wreath of 10 roses, the angel would insert a lily. After the wreath was complete, the angel placed the crown of roses upon the head of the novice.

After explaining the devotion to the Novice Master, who demanded to be told what he was seeing, they shared the vision with the other Franciscans, who then began to recite the Franciscan Crown of Our Lady’s Joys. It became a favorite devotion for the Franciscan friars. 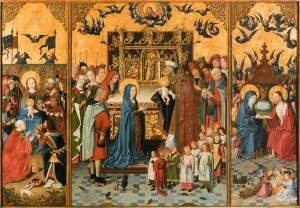 The Seven Joys of Mary are:

1. The Annunciation of the Angel to Mary

2. The Visitation of Mary to Elizabeth

3. The Nativity of Our Lord

4. The Adoration of the Magi

5. The Finding of Jesus in the Temple

6. The Resurrection of Our Lord

7. The Crowning of Our Lady, Mary, in Heaven as Queen

If you are interested in learning how to pray the Franciscan Crown Rosary, go here. If you would like to purchase this rosary, go here.

This blog post is dedicated to my friends at My Mother Mary. They do great work ensuring that we remember the importance the Blessed Virgin Mary plays in the life of Salvation History, the life of the Church, and in our daily lives. Please follow them on Facebook.