“Mondays with Mary” – The Theotokos Brings Joy to the Whole World

Since this upcoming Thursday, January 1, is the Solemnity of Mary, the Holy Mother of God, I wanted, as I have done over the past couple of years on this Solemnity, to provide you with a blog post that focuses specifically on Mary’s Motherhood and the Eastern derived title, Theotokos. Knowing full well that I am repeating myself here, and not all that concerned with it either, I will say that this title for Mary, Theotokos or God-Bearer, has been most favorite title for the Blessed Virgin ever since studying about the Council of Ephesus in graduate school at Franciscan University of Steubenville.

Since St. Cyril of Alexandria played such an important role in the declaration of this dogma in the 5th century, I have chosen for today’s “Mondays with Mary” a homily he gave at the Council. It’s my hope that with this homily and the reading of the blog posts from above, that you will come to know the importance of this great Marian feast that begins each New Year – the Solemnity of Mary, the Holy Mother of God. 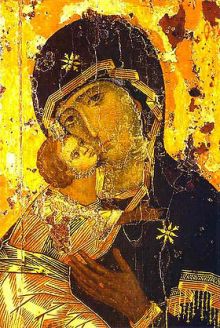 I see the assembly of the saints, all zealously gathered together, invited by the holy Mother of God, Mary, ever-virgin. I was feeling very sad, but then the presence of the holy Fathers changed this sorrow into merriment. Now the sweet words of the hymnographer David have been fulfilled in our presence: “Behold how fair, and how it is, when brothers dwell together as one!” (Ps 133:1). Hail, we say, O holy and mystic Trinity, who have called us together in this church dedicated to Mary, Mother of God. We hail you, O Mary Mother of God, venerable treasure of the entire world, inextinguishable lamp, crown of virginity, scepter of orthodoxy, imperishable temple, container of him who cannot be contained, Mother and Virgin, through whom it is said in the holy Gospels: “Blessed is he who comes in the name of the Lord” (Mt 21:9).

Hail, you who held the Uncontainable One in your holy and virginal womb! Through you, the Holy Trinity is glorified; the precious Cross is celebrated and adored throughout the world; heaven exults, the angels and archangels rejoice, the demons are put to flight, the devil, the tempter, falls from heaven, the fallen creation is brought back to paradise, all creatures trapped in idolatry come to know the truth.

Through you, holy baptism and the oil of gladness are administered to believers; through you, churches are established throughout the world; the peoples are led to conversion. What more shall I say? Through you, the only begotten Son of God shone forth as a light upon those who sat in darkness and in the shadow of death. Through you, the prophets made their predictions, the apostles preached salvation to the nations; through you the dead rise, sovereigns reign, and through you the Holy Trinity reigns.

But who among men is capable of celebrating Mary most glorious? The virginal womb: such a great wonder! This miracle has me enraptured. When has it ever been heard that a builder was prevented from dwelling in a temple that he built himself? Could he, who calls his own handmaid to be his Mother, be considered deserving of shame? Behold, now: the whole universe is rejoicing. The sea obeyed, recognizing [in the fathers] its fellow servants. For while the water surged in stormy billows, the passage of the saints made it smooth and calm. The creature water remembered the voice of the Savior: “Silence! Be still” (Mk 4:39). The passage of the fathers also subdued the earth, which previously had been infested with brigands. “How beautiful the feet of those who preach the good news of peace” (Rom 10:15). But what peace is this? Jesus, Our Lord, who was born from Mary, as he himself willed.

As we commemorate the great Solemnity on January 1, let us take to heart the words from St. Cyril of Alexandria, always desiring to be made humble, just as Christ Jesus was humble being born of a Virgin and becoming Man. In her role as Theotokos, let us ask the ever virgin to always lead us closer to her Son, and our Savior, Jesus Christ. She is the one, as our Mother, who leads us perfectly to Jesus Christ.