Advertisements
Quick Lessons from the CCC

Quick Lessons from the Catechism: The Love of Husband and Wife (and NFP Awareness Week)

Since this past Sunday, July 19 and running through Saturday, July 25, the United States Conference of Catholic Bishops is celebrating the National Natural Family Planning (NFP) Awareness Week. It’s a national educational campaign that helps married couples – man and woman as well as engaged couples preparing for the Sacrament of Marriage in the Catholic Church understand the importance of NFP and how beneficial it can be for the regulation of births naturally. How is it celebrated varies from diocese to diocese, but the week coincides with the yearly anniversary of Pope Paul VI’s encyclical, Humane Vitae, which explains to us the Catholic Church’s teaches on human sexuality, conjugal love, and parenthood.

If you have never read the above encyclical, I would highly encourage you to do so. The words of the Holy Father are prophetic since everything he stated in this document has produced the modern ills we witness each day when it comes to the offenses against marriage – adultery, high divorce rates, contraception, and the overall destruction of human dignity. If these ills weren’t enough, now we must endure same-sex marriage, which in turn could potentially bring government laws that favor polygamy, incest, and other offenses against human sexuality and marriage.

With this being said, I found this week’s NFP Awareness campaign the perfect opportunity to give to you the Catechism of the Catholic Church’s teachings on The Love of Husband and Wife, which includes, conjugal fidelity, fecundity of marriage, and the gift of a child.

The covenant which spouses have freely entered into entails faithful love. It imposes on them the obligation to keep their marriage indissoluble. [#2397]

Fecundity is a good, a gift and an end of marriage. By giving life, spouses participate in God’s fatherhood. [#2398]

The regulation of births represents one of the aspects of responsible fatherhood and motherhood. Legitimate intentions on the part of the spouses do not justify recourse to morally unacceptable means (for example, direct sterilization or contraception). [#2399]

To learn more on this topic, I would also suggest reading paragraphs 2360-2379, in particular #2370 which coincides with this week’s NFP Awareness week. Paragraph 2370 states,

Periodic continence, that is, the methods of birth regulation based on self-observation and the use of infertile periods, is in conformity with the objective criteria of morality. These methods respect the bodies of the spouses, encourage tenderness between them, and favor the education of an authentic freedom. In contrast, “every action which, whether in anticipation of the conjugal act, or in its accomplishment, or in the development of its natural consequences, proposes, whether as an end or as a means, to render procreation impossible” is intrinsically evil:

Thus the innate language that expresses the total reciprocal self-giving of husband and wife is overlaid, through contraception, by an objectively contradictory language, namely, that of not giving oneself totally to the other. This leads not only to a positive refusal to be open to life but also to a falsification of the inner truth of conjugal love, which is called upon to give itself in personal totality…The difference, both anthropological and moral, between contraception and recourse to the rhythm of the cycle…involves in the final analysis two irreconcilable concepts of the human person and of human sexuality. 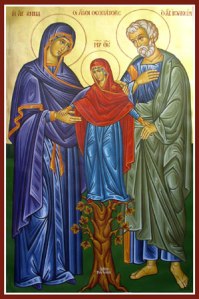 Sts. Joachim and Anne, Parents of the Blessed Virgin Mary…Pray For Us.

Categories: Quick Lessons from the CCC