Saint Peter Canisius was born in the year 1521 at Nijmegen in Holland, which was part of the Archdiocese of Cologne, Germany at the time. Although he lost his mother at any early age, his father, Jacob Kanis, married an excellent woman that became Peter’s stepmother who educated him well in the ways of God. He said as a boy he wasted a lot of time, but that’s hard to believe since he received his Master of Arts degree at the age of nineteen at the University of Cologne. Although he studied Canon Law for a short time at Louvain, at the bequest of his father who wanted him to be a lawyer, he refused marriage, took a vow of celibacy, and began to read and study theology.

After attending a retreat with Brother Peter Faber, the first follower of St. Ignatius of Loyola, young Peter joined the newly established Jesuit Order. He entered as a novice where he lived in the community of Cologne. He spent much time in prayer, in study, visiting the sick, and catechizing the uneducated. During this time he also published two works on St. Cyril of Alexandria and Pope St. Leo the Great.

After being ordained to the priesthood, he was well known for his excellent preaching. He was a delegate to the Council of Trent where he attended the sessions in Trent and Bologna. St. Ignatius, who asked him to serve him for 5 months, then brought him to Rome. He was sent off to start the very first Jesuit school in Messina, however; only after a short time there he was summoned back to Rome, took his final profession and was given more important duties in the order.

He was sent to Germany with two other Jesuits to combat the heretical teachings that were being taught in the schools in Ingolstadt. Duke William IV of Bavaria requested the Jesuits personally. St. Peter Canisius was able to remedy the university from the false teachings, which he then became rector and then vice-chancellor. Through his preaching and catechizing, he was able to revive the faith of many of the laity who lapsed and who had dived into heretical and immoral books.

At the request of King Ferdinand in 1552, he was sent to Vienna where he was given the same task that he performed so well in Ingolstadt. However, the issues in Vienna were far worse. Many of the churches were empty because the people of Vienna struggled to understand his German. However, in the end, we won the people over by serving the sick and ministering to those who were infected with the plague.

The See of Vienna was an open position in the Church and although the Pope, the Papal Nuncio, and the King wanted him to fill the empty spot, St. Ignatius only wanted him there for a short period of time free from ecclesiastical and government orders. While in Vienna, St. Peter began to work on his most famous work, a catechism titled, Summary of Christian Doctrine. It was published in 1555. He also published a shorter and shortest catechism. Both became very popular. 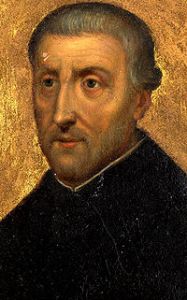 Just as did in his two previous stints, he was sent to Prague to reestablish the faith and to re-evangelize the lapsed Catholics. He established a college in Prague; so excellent was its education that Protestants started to attend. He was then sent to Worms, Germany where he took part in an ecumenical discussion between Catholics and Protestants. Knowing how useless these could be from his experiences, he still went as ordered. The conversations were heated and only widened the gap between the two even more.

Just as before, he was then sent to Augsburg in 1559 at the request of King Ferdinand to re-evangelize the town. He would be in Augsburg for six years catechizing both the lapse Catholics and Protestants. Many Protestants converted to Catholicism under his care. During this time, he also continued to write. He wrote texts on the letters of St. Jerome, a manual for Catholics, writings on the martyrs, rewrote the Augsburg Breviary, and wrote a General Prayer.

Upon leaving Augsburg, he then was assigned to Dillingen in Bavaria. The Jesuits had a college there and also oversaw the university. He really was happy to be there since his good friend Cardinal Otto Truchsess resided in this town. While there, he focused on teaching, writing, and hearing confessions. He also wrote a series of books to combat the anti-Catholic telling of history, which were composed by Protestants known as the Centuriators of Magdeburg. He later served in Innsbruck, where he continued with other editions of the history book. Although his health started to decline, he was always found preaching, catechizing, visiting the sick, and traveling with his superiors.

In the early 1580’s, he was able to establish a university in Fribourg in Switzerland. It was one of the cities with a very strong Catholic presence, but surrounded by Protestants. After fundraising the money needed, St. Peter was able to build the school, which became known as the University of Fribourg. For eight years, he focused on his Sunday preaching and during the week would visit other parts of the established Catholic area. It could be said that Fribourg remained a Catholic stronghold during a time when Protestantism was on the rise and growing.

In 1591, he had a paralytic seizure, which nearly killed him. However, he recovered from the seizure and continued to do what he did best – write and teach about the Catholic faith.

On December 21, 1597, Saint Peter Canisius died and entered heavenly glory. Only second to St. Boniface, St. Peter has been referred to as the Second Apostle to Germany. He is also known as one of the creators of a Catholic press. In 1925, Pope Pius XI canonized and declared him a Doctor of the Church. He is known as the Doctor of the Catechism.

St. Peter Canisius…Pray for Us.