“Mondays with Mary” – 10 Quotes from Pope St. John Paul II on the Presentation of the Lord

Tomorrow, in the Western Church, we will celebrate the feast of the Presentation of Our Lord, or otherwise known historically as the Purification of the Blessed Virgin Mary. This feast originated in the Eastern Churches and was known as “The Meeting” for many centuries. It is also now titled the Encounter of Our Lord with Simeon.

In the West, beginning in the sixth century this feast began to focus on the Purification of the Blessed Virgin Mary because of the words of St. Simeon from the Gospel of Luke. The feast was also accompanied by solemn blessings and processions with candles, hence, it is known by its popular name – “Candlemas.” It is here where we see that Christ’s life begins, which will then lead us to the Resurrection.

To commemorate this feast day, here are 10 Quotes from the 20th century Polish Pope, John Paul II, on the Presentation of the Lord –

“And here he enters. Brought by the hands of Mary and Joseph. He enters as an infant, forty days old, in order to meet the requirements of Mosaic law. He is brought to the temple like so many other Israelite children: the child of poor parents… This day is his feast; the feast of Jesus Christ, on the fortieth day of his life, in the temple of Jerusalem according to the provisions of the law of Moses (cf. Lk 2:22-24). And it is also her feast: Mary’s.”

“With his inspired words, Simeon, a man of the Old Covenant, a man of the temple of Jerusalem, expresses his conviction that this Light is meant not only for Israel, but also for pagans and all the peoples of the earth. With him, the ‘aged’ world receives in its arms the splendor of God’s eternal ‘youth’. However, the shadow of the Cross already looms in the background, because the darkness will reject that Light. Indeed, turning to Mary, Simeon prophesies: ‘This child is set for the fall and rising of many in Israel…’”

“The second characteristic element of today’s celebration is the reality of the meeting. Even if no one was waiting for Joseph and Mary when they arrived hidden among the people at the temple in Jerusalem with the baby Jesus, something most unusual occurs. Here they meet persons guided by the Holy Spirit: the elderly Simeon…and the prophetess Ann…” 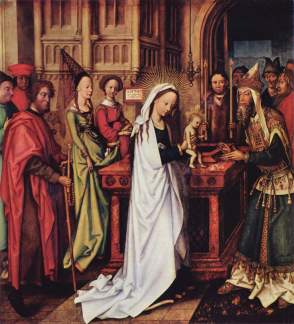 “These words resound in the temple of Jerusalem, as 40 days after the birth of Jesus, Mary and Joseph prepare to ‘present him to the Lord’ (Lk 2:22). By emphasizing the contrast between the modest, humble action of the two parents and the glory of the event as perceived by Simeon and Anna, the Evangelist Luke apparently wants to suggest that the temple itself is waiting for the Child’s coming.”

“To Mary Simeon said: ‘And a sword will pierce through your own soul also’ (Lk 2:35). The hymns of Bethlehem have now faded and the cross of Golgotha can already be glimpsed; this happens in the temple, the place where sacrifices are offered. The event we are commemorating today is thus a bridge as it were, linking the two most important seasons of the Church’s year.”

“The icon of Mary that we contemplate as she offers Jesus in the temple prefigures that of the Crucifixion and also anticipates its true interpretation of Jesus, Son of God, sign of contradiction. Indeed, on Calvary, the sacrifice of the Son, and with it, that of his Mother, reach fulfillment. The same sword pierces both, the Mother and the Son (cf. Lk 2,35). The same sorrow, the same love.”

“The picture of Mary who in the temple offers the Son to God, speaks eloquently to the hearts of the men and women who have made a total offering of themselves to the Lord through the vows of poverty, chastity and obedience for the Kingdom of Heaven. The theme of spiritual sacrifice is fused with that of light, introduced by Simeon’s words. The Virgin appears as a candlestick bearing Christ, the ‘Light of the world’.”

“The ransoming of the first-born is another obligation of the father, and it is fulfilled by Joseph. Represented in the first-born is the people of the covenant, ransomed from slavery in order to belong to God. Here too, Jesus – who is the true “price” of ransom (cf. 1 Cor 6:20; 7:23; 1 Pt l:19) – not only “fulfills” the Old Testament rite, but at the same time transcends it, since he is not a subject to be redeemed, but the very author of redemption.”

“Simeon’s words seem like a second Annunciation to Mary, for they tell her of the actual historical situation in which the Son is to accomplish his mission, namely, in misunderstanding and sorrow. While this announcement on the one hand confirms her faith in the accomplishment of the divine promises of salvation, on the other hand it also reveals to her that she will have to live her obedience of faith in suffering, at the side of the suffering Savior, and that her motherhood will be mysterious and sorrowful.”

As we celebrate this great feast in the Church tomorrow, let us take the words of Pope St. John Paul II to heart. Let us ask for his intercession and of course the intercession of Mother Mary to assist us in being like her when it comes to presenting Jesus to the world in which we live. As the sword pierced her heart; may it also pierce our heart.