After reading Kathy Schiffer’s article on National Catholic Register, which is titled, Who is the Lady in Blue that Pope Francis Venerated in Mexico?, I decided to do some research of my own, which included contacting Kathy via email to ask her some questions. Through my research, I found a few stories about Our Lady of Health, but it seems that the most reliable story is the one that Kathy shared in her article and the same one that I will share with you today.

When we think of the Virgin Mary in Mexico, our mind automatically goes to Our Lady of Guadalupe, however, Our Lady of Health, also known as the Our Lady of San Juan, is another title for the Blessed Mother. She is venerated in Mexico, Spain, and parts of the United States.

The Virgin in Blue is in harmony with the traditional image of Our Lady of the Immaculate Conception, who stands on a crescent moon made of silver. Where she differs is the articulately designed blue robe that is embroidered with a floral cape that spreads out. She also wears a red crown and a beautiful silver halo displaying her greatness as the Virgin for all time. 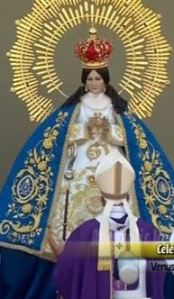 The story begins in 1543 in a small village northeast of Guadalajara, Mexico by the name of San Juan Mezquititlan. Later on, the village would be renamed San Juan de Los Lagos. In this year, a priest of Spanish descent, Fr. Miguel de Bologna, brought an Immaculate Conception statue to the town, and because the statue was not in good shape, they put it in the sacristy and not in the church where people could view it.

Some time later, as is reported by local traditions, a circus acrobat and family, his wife and two young daughters, were passing through and decided to stay in the town to perform for the local residents. Although they had practiced their routine numerous times, which included performing stunts flying through the air over swords and knives, when they performed for the villagers, something went desperately wrong. The youngest of the two daughters for some reason slipped from the wires and landed on the swords and knives below mortally wounding her.

Realizing there wasn’t much they could for their daughter, since her body was mortally wounded, they wrapped in our clothes for burial and carried her to the chapel of Our Lady of San Juan would they would bury her. However, as they drew near to the church grounds, the wife of the caretaker came to them and told them to have faith. She quickly ran to the sacristy to attain the statue, and upon returning to the mourning parents, she laid the statue next to the body of the little girl. After only a few minutes, they noticed there was movement coming from under the burial clothes. As the parents removed the burial clothes, they discovered their daughter was alive and completely healed.

After this miracle occurred, the news spread rapidly across the region to all the other villages. The Mexican people started to venerate the Blessed Mother as Our Lady of San Juan. In other villages, she was given the name – Our Lady of Health. Since this first miracle, many other miracles have happened over the centuries. Our Lady has also interceded for the people of the region in time of plague and drought.

Our Lady of Health…Pray For Us.

Below is short video of a Procession of Our Lady of Health from December 8, 2011 –