Today is the memorial for Blessed Karl of Austria, the last Catholic emperor and king of Austria, who is currently in the Canonization process.

Karl von Habsburg was born on August 17, 1887 in the country of Austria. He had a wonderful childhood and was taught the Catholic faith. He was a virtuous young man known for his generosity, loyalty, and intelligence. His tutor recollects that he loved serving as an altar boy in Mass. From his young days as a child, he had a great devotion and love for the Holy Eucharist and the Sacred Heart of Jesus. When he turned 16 years old, he was commissioned as a 2nd Lieutenant in the Imperial Army.

After courting Princess Zita of Bourbon-Parma (now Venerable Zita) for some time, Karl takes her to the Marian Shrine of Mariazel. There he proposes to her in front of the Blessed Sacrament. He places their engagement under the protection of the Blessed Virgin Mary. On the night before their wedding Karl tells his bride: “Now  we must help each other get to Heaven.” Their marriage is blessed with eight children.

As a family, they focused on daily devotions such as the Rosary, novenas, and reading the Scriptures. They would attend daily Mass together, study the catechism, and were devoted to the Blessed Sacrament, the Immaculate Conception, and the Holy Cross. 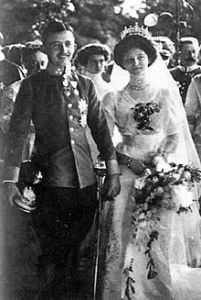 On June 28, 1914, Archduke Ferdinand is assassinated beginning the First World War. Karl is the next in line for the throne. On November 30, 1916, Karl is elevated to Emperor. He was a good moral and Catholic emperor who desired to put the needs of his people before his own which did through spiritual and civil actions.

After the First World War was finished, he was told he had to give up his throne. He refused stating that the crown entrusted to him was from God and a holy trust. He could never betray God, his subjects or his dynasty. For Karl of Austria, the culture he bears is Christianity.

In the end, he is exiled with his family. At the end of his short life, at the point of death, he calls his eldest son to be at his bedside to say good-bye. He says to his son, Otto, watch “how a Catholic and Emperor conducts himself when dying.” At the age of 34 years old, in his wife’s arms, he enters eternity holding a crucifix and saying the words, “My Jesus, Thy Will be done—Jesus.”

At the Mass for his Beatification, Pope St. John Paul II said in his homily,

The decisive task of Christians consists in seeking, recognizing and following God’s will in all things. The Christian statesman, Charles of Austria, confronted this challenge every day. To his eyes, war appeared as “something appalling”. Amid the tumult of the First World War, he strove to promote the peace initiative of my Predecessor, Benedict XV.

From the beginning, the Emperor Charles conceived of his office as a holy service to his people. His chief concern was to follow the Christian vocation to holiness also in his political actions. For this reason, his thoughts turned to social assistance. May he be an example for all of us, especially for those who have political responsibilities in Europe today! 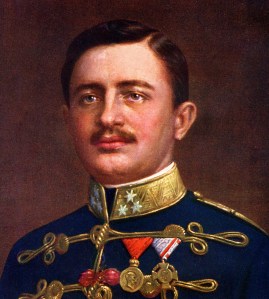 Blessed Karl of Austria…Pray For Us.