Today would have been the 97th birthday of Karol Wojtyla, known to so many as – Pope St. John Paul II. There isn’t a day that goes by that I don’t think about him fondly. The reason I do what I do on this blog and in my position at the parish is based on his life and his many great documents. The influence of John Paul II on my own life is truly immeasurable. I was blessed to see him three times in my life – Phoenix, Arizona in 1987, Denver, Colorado in 1993, and in Rome, Italy in 2000. I am the JP2 Generation.

For a collection of pictures from a previous post, check out this one I wrote on his birthday in 2014. Below are the Top 5 All-Time Posts (most views) I have written in the past –

1. 12 Quotes from Blessed Pope John Paul II on the Role of the Christian Family in the Modern World

2. 12 Quotes from Pope St. John Paul II on Our Lady of Guadalupe

3. “Mondays with Mary” – 5 Quotes from Pope St. John Paul II on the Mother of Mercy

For the complete collection of my writings on him, click here. 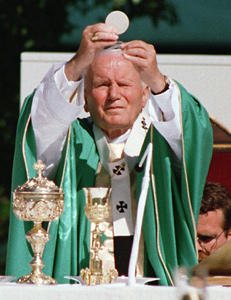