“Mondays with Mary” – Our Lady of the Way

This coming Wednesday, May 24, is the optional memorial of Our Lady of the Way, also known as – Santa Maria della Strada. Often celebrated in Jesuit parishes, schools, and communities, this optional memorial was restored to the Jesuit’s Proper Calendar in 2014.

Santa Maria della Strada was the first Jesuit church in the city of Rome. When St. Ignatius and his cohorts first came to Rome, it was here where they often celebrated Mass, heard Confessions, taught the faithful, and provided catechesis to children. After seeing so much good fruit, the Pastor of the parish joined the Jesuits and asked the Holy Father, Pope Paul III, to place the parish under the care of the Society of Jesus. It was during this papacy that the Society of Jesus was officially approved.

In the church of Maria della Strada, was a late medieval mural, which was on the external wall of the small chapel. St. Ignatius often prayed in front of this mural. He had a great devotion to Our Lady throughout his life and placed the patronage of the Jesuit order under Mary’s protection. It was the place where many of the Jesuit novices professed their vows when joining the order. When they were sent to foreign lands as missionaries, many of the Jesuits prayed in front of this image. 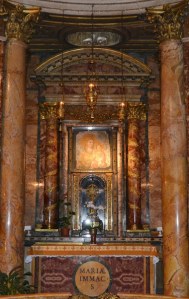 Our Lady of the Way…Pray for Us.

Tagged as: Jesuit's Proper Calendar, Jesuits, Our Lady of the Way, Santa Maria della Strada, Society of Jesus, The Gesu in Rome, what is Jesuit church in Rome