7 Quotes by Pope Benedict XVI on the Assumption of Mary

As I have done in the past, this being the tenth article on the Assumption, I have found quotes about the great Solemnity we are celebrating today in the life of the Catholic Church. These quotes are from the homilies of Pope Benedict XVI between 2005 and 2012.

The Assumption of the Blessed Virgin Mary into Heaven is a very important and key Solemnity for me personally. Throughout my life, there have been life changing events that have occurred in and around this day. Ten years ago, I left Arizona a few days before this Solemnity and made my way to Franciscan University of Steubenville for graduate school in Theology. All of this that you read on this website, the speaking I do publicly, and the work I do in my position at the parish is the fruit of my 2 years of study at Franciscan.

The other life changing event that is about to happen in September is my wedding. I met my fiancée, Megan, on August 18 of last year, three days after this Solemnity. Our meeting also coincided with the 54-day Novena to Our Lady of Fatima, something the Diocese of Phoenix was praying together. We both attribute this Novena to our relationship growing as rapidly as it did. Mama Mary has been a very important person in the life of our relationship so far and she will continue to be so as we enter the Sacrament of Holy Matrimony on another Marian feast.

So with this being, on this great Solemnity of the Assumption of Mary, here are 7 fantastic quotes from a future Doctor of the Church –

1. “While she lived on this earth she could only be close to a few people. Being in God, who is close to us, actually, “within” all of us, Mary shares in this closeness of God. Being in God and with God, she is close to each one of us, knows our hearts, can hear our prayers, can help us with her motherly kindness and has been given to us, as the Lord said, precisely as a “mother” to whom we can turn at every moment.”

2. “St Augustine says: “Before conceiving the Lord in her body she had already conceived him in her soul”. She had made room for the Lord in her soul and thus really became the true Temple where God made himself incarnate, where he became present on this earth. Thus, being God’s dwelling place on earth, in her the eternal dwelling place has already been prepared, it has already been prepared for ever. And this constitutes the whole content of the Dogma of the Assumption of Mary, body and soul, into heavenly glory, expressed here in these words. Mary is “blessed” because – totally, in body and soul and for ever – she became the Lord’s dwelling place. If this is true, Mary does not merely invite our admiration and veneration, but she guides us, shows us the way of life, shows us how we can become blessed, how to find the path of happiness.” 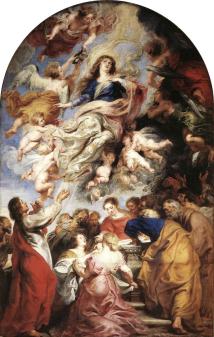 Assumption of the Virgin Mary, Rubens.

3. “Today too, the dragon exists in new and different ways. It exists in the form of materialistic ideologies that tell us it is absurd to think of God; it is absurd to observe God’s commandments: they are a leftover from a time past… Even now, this dragon appears invincible, but it is still true today that God is stronger than the dragon, that it is love which conquers rather than selfishness…The message of my life was: I am the handmaid of God, my life has been a gift of myself to God and my neighbour. And this life of service now arrives in real life. May you too have trust and have the courage to live like this, countering all the threats of the dragon.”

4. By looking at Mary’s Assumption into Heaven we understand better that even though our daily life may be marked by trials and difficulties, it flows like a river to the divine ocean, to the fullness of joy and peace. We understand that our death is not the end but rather the entrance into life that knows no death. Our setting on the horizon of this world is our rising at the dawn of the new world, the dawn of the eternal day.”

5. The Assumption reminds us that Mary’s life, like that of every Christian, is a journey of following, following Jesus, a journey that has a very precise destination, a future already marked out: the definitive victory over sin and death and full communion with God, because as Paul says in his Letter to the Ephesians the Father “raised us up with him, and made us sit with him in the heavenly places in Christ Jesus” (Eph 2: 6). This means that with Baptism we have already fundamentally been raised and are seated in the heavenly places in Christ Jesus, but we must physically attain what was previously begun and brought about in Baptism. In us, union with Christ resurrection is incomplete, but for the Virgin Mary it is complete, despite the journey that Our Lady also had to make. She has entered into the fullness of union with God, with her Son, she draws us onwards and accompanies us on our journey.”

7. “On 1 November 1950, Venerable Pope Pius XII proclaimed as Dogma that the Virgin Mary “having completed the course of her earthly life, was assumed body and soul into heavenly glory”. This truth of faith was known by Tradition, was affirmed by the Fathers of the Church, and was a particularly important aspect in the veneration of the Mother of Christ. Precisely this devotional element, so to speak, was the driving force behind the formulation of this Dogma. The Dogma appears as an act of praise and exaltation of the Holy Virgin. It also emerges from the text of the Apostolic Constitution, where it affirms that the Dogma is proclaimed for “the honour of her Son… for the increase of the glory of that same august Mother, and for the joy and exultation of the entire Church”. What was already celebrated in the veneration and devotion of the People of God as the highest and most permanent glorification of Mary was thus expressed in the form of a dogmas; the act of the proclamation of the Assumption was presented almost as a liturgy of faith.”

Our Lady of the Assumption…Pray for Us.