Here is the homily that my college friend, Bishop Steven J. Lopes, gave at the Ordination to the Priesthood, for my other college friend, Fr. Bede Clark, OSB, on Saturday, July 8, 2017 at Prince of Peace Abbey in Oceanside, California.

In his homily, Bishop Lopes mentions The Rule of St. Benedict. If you have never read The Rule, I would encourage you to do so. It’s a spiritual classic and one that we all read in the Saint Ignatius Institute over 20 years ago. I still have my original undergraduate copy.

Three years ago, nearly to the day, you professed your solemn monastic vows in this abbey church. On that occasion, Father Abbot reflected on monastic life through the lens of obedience, the first of the three Benedictine vows. I mention this not only because it was a particularly good homily, but also because it disclosed a fundamental insight, one which also provides the context of our celebration today. That foundational insight is simply this: the true nature of a monk cannot be known from outside. Monastic life is like a stained glass window. To observe it from some safe distance gives us perhaps some sense of its shape, some idea of its content…but the figure remains darkened and somewhat obscured. It is only when enters the church and looks at the window from within that its true brilliance is revealed in all its intricacy and vibrant color. And so too with monastic life. It is only when it is lived in integrity, when the monk plunges himself into the life of obedience, stability, and conversatio morum that its true brilliance is revealed in all its intricacy and vibrant color.

The same can be said of priesthood, which is after all, an interior conformity with Christ effected in and by the Holy Spirit. The priesthood of Christ into which you will be ordained today is one. By the laying on of hands and the invocation of the Holy Sprit, you will be conformed to Christ the Teacher, the Priest, and the Shepherd. Indeed, Priests are established by Christ himself as co-workers to the Order of Bishops, so that by their ministry the Church, which is the Body of Christ, is built and grows into the people of God, a holy Temple. At the same time, priesthood conferred and lived out in the monastery is a particular expression of the one priesthood of Christ, an expression whose glory and beauty is to be discovered in the interior dynamism of monastic life itself. And so we have to return to obedience, stability, and conversatio morum to see the true brilliance of what God is doing here today.

In the Rule, Holy Father Benedict specifies of priests: “Let him who is ordained beware of arrogance and pride, and presume to do nothing that is not commanded him by his Abbot, knowing that he is now all the more subject to the regular discipline. Let him not by occasion of his priesthood forget the obedience and discipline of the Rule, but let him progress ever more and more in the Lord” (RB 62:2).  The emphases here on “all the more subject” to the Rule and “progress ever more and more in the Lord” situate priesthood firmly in the monastic observance. There is not monastic life on the one side and priesthood on the other, but priesthood in the monastery is to be seen as a further unfolding of the consecration you made when you sang your Sucipe before God and this community. Saint Benedict would have you understand your priesthood first as service to your brothers, to be lived in concrete charity in this Abbey. The sacramental grace you are given is for this monastery to thrive, so that by building up the community in which you live out your stability, the monastery might truly be a beacon on the hill drawing men and women to experience something of the Divine Life in Christ. And while from time to time you will be sent forth from this house for Mass and sacramental duties in the surrounding communities, this too is a pastoral service of this monastery to which you contribute. 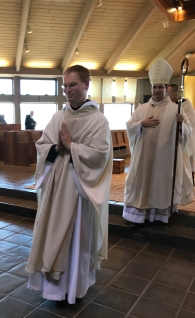 Father Bede, see your priesthood, then, as part of the monastic conversion of life to which you have vowed yourself. For you, priestly virtue consists in continually striving for personal conversion so as to persevere in living the monastic observance. Priestly holiness consists in careful attention given to performing your religious duties in community life. Ultimately, this conversatio morum is the interior conformity to Christ, which is the principle work of the Holy Spirit poured out to us in the Church’s Sacraments.   It is no wonder, then, that the evangelical counsels of poverty and chastity arise like flowers from this root, which is Christ himself.

Another insight about priesthood as it is lived in the monastery can be drawn from the insistence of the Rule about the primacy of the sacred liturgy: Nihil Operi Dei praeponitur – Let nothing be put before the Work of God (RB 43:3) With these words, Saint Benedict established the absolute priority of the Divine Office and the Mass in respect to every other duty of monastic life.  In the face of other legitimate claims on a monks time such as study, apostolate, and the physical works at support the house, Saint Benedict unequivocally underscored the priority of God Himself in our life: “As soon as the signal for the time of the divine office is heard, let everyone, leaving whatever he has in his hands, hasten with all speed, yet with gravity” (RB 43:1).

The priority of the Work of God informs a liturgical consciousness, which is just another way of describing a monastic consciousness.  You, dear Brother, have been formed in this consciousness since the day you entered this monastery. Now as a priest, your celebration of the Eucharist and the Sacraments are in deeper service of the Work of God. And given the absolute priority of this Work in the monastic life, it is no understatement to say that the attention and preparation you give to your homily and to liturgical celebration, through which you lead your confrères in the contemplation of the Divine Mystery, is the most important thing you do. Not only important for the monks of this house, but also for the witness it offers to the Church and the world. The priority of God, which is so often neglected and forgotten in the rising tide of secularism, is essential for maintaining the good of human society.  If God is not important anymore, the criteria for establishing that which is important are overturned, which has disastrous consequences for human dignity and flourishing.

Commenting on this insight of the Rule, Pope Benedict XVI sounded a note of alarm regarding the situation of the Church in our own day. He said: “Man’s ‘doing’ almost led to forgetting God’s presence. In this kind of situation, it becomes ever clearer that the Church’s existence lives from the proper celebration of the liturgy and that the church is in danger when the primacy of God no longer appears in the liturgy and, therefore, in life…the true renewal of the liturgy is the fundamental condition for the renewal of the Church” (Benedict XIV, 11 July 2015, Preface to the Russian edition of volume one of his Opera Omnia). Your attention to the primacy of God, the primacy of the celebration of the Church’s liturgy, is of central importance: not just for your own personal sanctification, or even for the sanctification of your bother monks. But, indeed, the rest of us are relying on it so that our Church can be renewed and enlivened.

Monastic life is like a stained glass window. When one enters the edifice of obedience, stability, and monastic conversion of life, what is revealed is a brilliant intricacy of light and color as the glory of Almighty God is directed and refracted in the Church through this privileged form of religious consecration. The image that emerges in that window is the refulgence of Divine Life to which, in God’s mercy, we have been called in Christ. And how is that Divine Life to be described, to be enfleshed in our own life and in our own day? Well, according to the wisdom of the Rule, the Divine Life is reflected in the very monastic life you are ordained to serve:

“Let monks, therefore, practice zeal with most fervent love: that is, let them in honor anticipate one another; let them bear most patiently one another’s infirmities, whether of body or of character; let them endeavor to surpass one another in the practice of mutual obedience; let no one seek that which he accounts useful for himself, but rather what is profitable to another; let them practice fraternal charity with a chaste love; let them fear God; let them love their Abbot with a sincere and humble affection; let them prefer nothing whatever to Christ; and may Christ bring us all alike to life everlasting. Amen  (RB: 72).”