40 Years Ago Today, A Polish Cardinal Become Pope, and a Prophesy was Fulfilled

On October 16, 1978, the Cardinals of the Catholic Church gathered in the Sistine Chapel and elected the first non-Italian Pope in 455 years. Many people know him as Karol Wojtyla but the world knows him now as Pope Saint John Paul II. He is my hero and the reason I do things I do today.

I don’t remember his election like I remember his successors since I was only 4 years old, but nevertheless, the impact he has made on my life since I was 19 years old is unfathomable. In the years since then, I have read countless articles, documents, and books written by him and about him. I have given talks over the years, and most of the time, quoting him as at least once in my presentations. As my former boss has love and respect for Pope Emeritus Benedict XVI, I have love, admiration, and respect for Pope John Paul II. 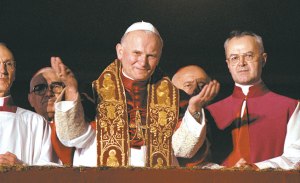 Pope St. John Paul II on the day of his election to the Papacy.

Even though I have written on him many times, it seems that I am always learning more about him and the potential things written in reference to him. In 1848, in the winter of his life, the Polish poet, Juliusz Slowacki, wrote an eloquent and prophetic poem, titled “The Slavic Pope.”  It is believed that this poem is speaking about the future John Paul II –

Behold, the Slavic pope is coming,
a brother of the people.
Behold, he already pours the world’s balm
on our breasts.
And the angel-choir sweeps flowers
toward his throne.
He distributes love, as lords today
distribute arms.
Above him the beautiful sky is opened
from either side.
Across nations he acts as brother,
the voice sent forth.
He brings health, enkindles love
and saves the world.

I see three points specifically, although there are more, in this poem that could be attributed to John Paul II – first, a brother of the people – he was like a brother, an uncle, a son, and father to so many people. He had the ability to reach people through relationships that impacted them for a lifetime. Still today countless people reflect on the relationship they had with him with so many saying that he was like a brother to them.

Second – Across nations he acts like a brother – again, focusing on this brotherly theme we saw him for many years traveling the globe as not only the Pope of the Catholic Church but a brother to humanity. His love for the human person has always been at the forefront of his many writings. I was blessed to see him three times in my lifetime – two World Youth Days (Denver and Rome) and on his second visit to the USA in 1987 in Phoenix, Arizona.

Third – He brings health, enkindles love, and saves the world – John Paul II brought a spiritual renewal and awakening to every place he visited. He was the Medical Resident to the Divine Physician. He loved every person, no matter who they were and where they resided. His life was an action of love to the human person. In saving the world, he didn’t do it on his own, but brought forth Jesus Christ to the world as the Vicar of Christ. It can be argued that he saved the world he knew, his homeland Poland, from the evils of Socialism and Communism as well as the lands that surrounded Poland, the lands of the Slavic people.

Whether this poem is written about John Paul II or some other future Slavic Pope can be left up to an academic discussion, but for now, let us celebrate that 40 Years Ago Today, the Cardinals of the Church gave us Pope Saint John Paul II.

Authors Note: I am connected to Fr. Carlos Martins on social media. He posted the poem about John Paul II this morning. I borrowed it from him and wrote this article.