“Mondays with Mary” – Our Lady of Bavaria (Altötting)

Our Lady of Bavaria, also known as Our Lady of Altötting, resides in the Chapel of Grace in the region of Bavaria, just under ten miles (15.7 km – Google Maps) from Marktl, the birthplace of Pope Emeritus Benedict XVI. There have been so many miraculous healings and graces received that the shrine is known has the “Lourdes of Germany.”

Although there have been countless miracles over the centuries, the greatest miracle occurred in 1489. According to eye witnesses, a young boy who had drowned was brought to the shrine by his very faithful mother. She laid the boy in front of the image of the Mother of God pleading and praying for a miracle. As others watched, the boy was restored to life. From that moment on, the chapel has been a very popular place for Catholic pilgrims in Germany.

In 1330, Emperor Ludwig IV, founded a Benedictine monastery at the location, then, along with his family and twelve knights and their families took it upon themselves to guard the place. The Emperor also gave a small statue of the Blessed Virgin Mary that was created and carved in Italy. Once this image of the Mother of God was put in place, many people began to converge on the site, for both the image of Mary and the intellectual abilities of the Benedictine monks. Although originally oversee by the aforementioned religious order, it has been run by Capuchin friars for many centuries.

In 1744, the medieval era church was destroyed in a fire. The church that followed was built and designed in German Baroque. The chapel was designed as an octagonal shape. It is believed to be the oldest Marian shrine in Germany. The sanctuary sits in a beautiful and awe-inspiring mountain setting. 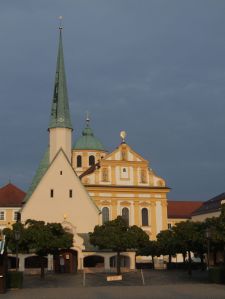 In the middle of the 1800’s, the abbey was suppressed as were other Bavarian religious houses due to the rise of Josephinism (a Church-State policy of Joseph II (1741-1790) that allowed the secular state to interfere in church affairs), however, in 1904, the suppression was lifted.

Our Lady of Bavaria…Pray for Us