Last Wednesday, July 4, 2012 – Independence Day for the United States of America, I was able to attend the Closing Mass for the Fortnight for Freedom at the National Basilica of the Immaculate Conception in Washington, D.C. I found it providential that I could attend because I have been writing about religious freedom ever since the HHS Mandate was promulgated by this current tyrannical administration in the White House. Truth be told, I was in the D.C/Northern Virginia area for a friend’s wedding that would occur on the following Friday, but since the closing Mass was to happen while I was there, I found myself blessed to be in the area.

I was sitting in the front row of the back section of the basilica on the right hand side. 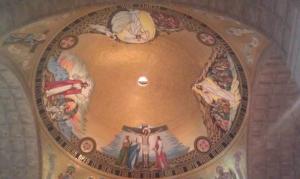 I could look up from my seat and see the mosaic dome that portrays Jesus’ Temptation in the Desert, his Crucifixion, Resurrection and Ascension. Sitting next to me was a nice married couple from Baltimore who I talked to briefly before Mass began. We talked about my blog a bit and the husband said that he knew people in Phoenix, Arizona. The husband has recently contacted me via email to assist me network with another gentleman in the Phoenix area for potential employment.

As the procession began with the altar servers, then the deacons, I noticed the vast amount of priests that showed up for this important Mass. There were so many priests present, even Cardinal Donald Wuerl mentioned it before Mass began as he thanked all the hierarchy and lay faithful in attendance. There were also quite a few Bishops present as well. It was so great to be at this closing mass! I truly felt blessed being in the presence of so many great and faithful Catholics. I would say the highlight of the Mass, not including when Jesus became present on the altar – which happens at every Mass, would be Archbishop Charles J. Chaput’s homily that can be read here. His homily was so inspiring! His passion for religious freedom is contagious. Everyone present was inspired to stand up for religious freedom for the months ahead. I would encourage you to read his homily located above.

In his homily, the one thing that really stood out for me was when he said that Caesar isn’t able to give or take away religious freedom. He may be able to interfere with it, but when he does he takes away from his own legitimacy. Read the homily and this will make more sense. Religious freedom, in accordance with the Natural Law, is rooted in the very foundation of our humanity. At the end of his homily, he received a loud ovation from all in attendance. There were even people waving small American flags in the basilica.

As Mass ended and the procession exited the nave of the basilica, I found myself with tears in my eyes. I said two things to myself. First, “Man, I love being Catholic.” Second thing I said, “If being persecuted is what it’s going to take, then bring it!”

Even though the Fortnight for Freedom has concluded, we all need to be diligent and continue to fight for our religious freedom. We need to continue to pray, catechize, battle, and support each other during this trying time in our country’s history. I encourage you to read all that you can on religious freedom. Continue to follow my blog (many of my February posts are on conscience formation and religious freedom) and other Catholic bloggers who will continue to write on religious freedom, especially as we draw closer to this upcoming election. This election could define our country for generations to come. The current person that calls himself our president must be removed from the oval office for if he is not, the United States of America could cease to exist, as we know it.

**Note: I will be on a short hiatus over the next 5 days or so since I am moving back to Phoenix. Please continue to read my blog and check out older posts during my short absence. Also, please pray that my move is efficient and safe.**