The Day I Drove Fr. Benedict Groeschel to the Pittsburgh Airport

In a matter of hours, the body of Fr. Benedict Groeschel, C.F.R. will be laid to rest here on earth following the Funeral Mass at the Cathedral-Basilica of the Sacred Heart in Newark, New Jersey. When I heard that Fr. Groeschel passed away last Friday, I quickly said a prayer for the repose of his soul and also remembered the forty-five minutes I spent with him in a car from Steubenville, Ohio to the Pittsburgh Airport. 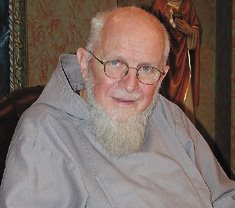 In the Summer of 2009, as a graduate student in Theology at Franciscan University of Steubenville, I worked as a driver for the transportation division for the Franciscan Summer Conferences. As a driver in transportation, one of the perks was picking up and dropping off speakers at the Pittsburgh Airport. Out of all the people I drove that summer, which included Steve Ray and David Currie, when I was asked to take Fr. Benedict Groeschel to the airport by my supervisor, Alex Hart, I nearly jumped out of my skin with excitement and joy. Being that I was one of the older drivers, she knew that she could trust me to be at his hotel at 5:00am to pick him up.

Within hours, my friends found out that I was taking Father to the airport, either by me telling them or others telling them. At once I started to receive rosaries, medals, scapulars, holy water, and just about every other sacramental you can think of for Fr. Groeschel to bless on our ride to the airport. By the time I arrived at his hotel at 5:00am, I had three medium size zip-lock bags full of sacramentals, plus the book I bought, Praying in the Presence of Our Lord – Prayers for Eucharistic Adoration by Fr. Groeschel.

I barely slept that night, woke up around 4:00am, and arrived at the hotel at 4:30am for the 5:00am pickup. It was a humid, rainy, very early summer morning in Steubenville. My heart was pounding fast…I was so nervous! Then all of a sudden, walking with a cane and with the assistance of a young CFR who traveled with him, Fr. Groeschel came walked into the lobby. I introduced myself and told him I was taking him to the airport. He shook my hand with his left since he did not use his right hand.

With the assistance of the young CFR, we got him into the front passenger sit and put his bags in the trunk. The first question he asked me was if I had a wife, after I said no, he replied, “Good. Neither do I.” We laughed and I realized my anxiety was gone. Noticing the bags of sacramentals on the dash, he blessed them and signed his book for me (see picture below).

After saying a short prayer for our drive to the airport, Fr. Groeschel said to me, “Where are you from?” I replied, “Phoenix, Arizona.” He said, “not with that accent!” After the three of us laughed, I then said, “I am originally from New Jersey.” So he said, “where in New Jersey” and my response was Bergen County. He then nudged my right arm with his left and said, “come on?!…where in Bergen County.” I then said I was born in Newark, where my parents were from, but that I lived for nine years in the town of Wood-Ridge. He then nudged my right arm, a little harder this time, and said, “come on?!…I lived in Woodridge as baby for a short time.”

We were both in complete shock at this point. I remember him saying that he had never met anyone on his travels before that was from Woodridge, N.J. We also learned that the church he was baptized in, Our Lady of the Assumption, was the same church I received my First Holy Communion (he nudged my arm the hardest after learning this information).

As we continued our drive on U.S. 22, he asked me many questions about being a graduate student in Theology at Franciscan. I shared my thoughts and how I came to Franciscan after teaching high school theology for four years in Phoenix. Eventually the conversation ended up on the Early Church Fathers and how important they are in the life of the Catholic Church. I remember thinking to myself in the car, “I AM TALKING TO FR. BENEDICT GROESCHEL ABOUT THE CHURCH FATHERS!!!” When I applied for the driver position in May, it never came to me that I would find myself in this experience.

As quickly as the drive began to the airport, it was quickly over. Once I stopped the car, the young CFR shook my hand, said thank you, and told Fr. Groeschel that he would get his bags out of the trunk. Fr. Groeschel then shook my hand and asked if he could pray for me. I said yes and he quickly recited a short prayer, blessed me, and said, “I will talk to the Blessed Mother about you today.” I thought to myself at that very moment, he probably actually has conversations with her.

As the young CFR came over to the car with a wheelchair and just as Father was about to exit the car, he turned around one last time and said to me, “You will do great things for the Church very soon.” I think I said thank you but who knows! I was truly at a loss of words. It was one of my those experiences that just sticks with you. Every time his name has been mentioned around me since that day, I tell this story.

So on this day, October 10, 2014, let us pray for the soul of Fr. Benedict Groeschel, C.F.R. and that he, like St. Therese of Lisieux, will do more work for us from Heaven than he did for us here on Earth.

Tagged as: CFR, Fr. Benedict Groeschel, Franciscan Friars of the Renewal, Franciscan Summer Conferences, Praying in the Presence of Our Lord