It’s been a couple of years since I wrote about the great Marian feast known as Our Lady of Fatima, which is celebrated on May 13. And although I have quoted Pope St. John Paul II in the past here, along with his successors, I found it necessary to focus on more of the words from the Polish saint in regards to Fatima for this week’s feast.

It was on May 13, 1981 that the attempt on his life took place in St. Peter’s Square, as he made his ways through the throngs of people waiting to catch a glimpse of him. He attributes the bullet missing his heart by centimeters to the intercession of Our Lady of Fatima. As you might know, John Paul II had a major devotion to the Blessed Mother and also attributes many of the blessings in his life to her work in cooperation with Jesus Christ.

Now let us read some of the quotes from Pope St. John Paul II on Fatima. Most of these quotes come from his Fatima Address in 1982, unless otherwise noted.

1. “For how many children in the history of the Church has the Eucharist been a source of spiritual strength…there are many boys and girls among those declared by the Church to be saints or blessed…Mary, in the course of history, has not failed to show her motherly care for the little ones…think of…Lucia, Francisco, and Jacinta of Fatima.”– Letter to Children, 1994

2. “In harmony with the tradition of many centuries, the Lady of the message indicates the rosary, which be rightly be defined as ‘Mary’s prayer’: the prayer in which she feels particularly united with us.

3. “Consecrating the world to the Immaculate Heart of the Mother means returning beneath the cross of the Son. It means consecrating this world to the pierced heart of the Savior, bringing it back to the very source of its redemption. Redemption is always greater than man’s sin and the ‘sin of the world.’ The power of Redemption is infinitely superior to the whole range of evil in man and the world. The heart of Mary is aware of this, more than any other heart in the whole universe, visible, and invisible. And so she calls us. She not only calls us to be converted: she calls us to accept her motherly help to return to the source of redemption.”

5. “Let us offer ourselves to God, through the Immaculate Heart of Mary, in the act of thanks and willingness; let us offer our sacrifices in union with Christ the Redeemer and, with our souls in prayer of atonement and conciliation, let us repeat: Lord Jesus, it is love of you, in reparation for sins and for the conversion of sinners.”

6. “The Blessed Virgin Mary, the first of the redeemed, the first to have been closely associated with the work of Redemption, will always be our guide and model.” – Rome Audience, 1983

7. “Motherhood means sharing in the life of the child. Since Mary is the mother of us all, her care for the life of man is universal. The care of a mother embraces her child totally. Mary’s motherhood has its beginning in her motherly care for Christ…In the light of the mystery of Mary’s spiritual motherhood, let us seek to understand the extraordinary message, which began on May 13, 1917, to resound throughout the world from Fatima, continuing for five months until October 13 of the same year.” 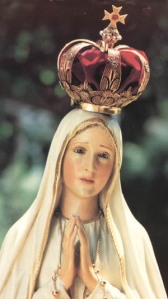 Our Lady of Fatima…Pray For Us.