Quick Lessons from the Catechism: Pentecost and ‘I Believe in the Holy Spirit’

Today is Pentecost Sunday, the great day known as the birth of the Catholic Church and the day the Holy Spirit, which was promised by Jesus Christ numerous times in the Gospels, descended upon the Apostles (and more than likely the Blessed Virgin Mary as well) just days after Jesus’ Ascension into Heaven. Pentecost is known as the founding of the Catholic Church as the bearer of God’s spirit to the world. It is one of the great Solemnities in the liturgical calendar and one of the great days culminating the Easter Season.

So before we get to the heart of today’s QLC, ‘I Believe in the Holy Spirit’, lets briefly focus on Pentecost.

Originally, the feast was known as the Feast of Weeks (Dt 16:10) or the Feast of Harvest (Ex 23:16). Later on, among the Jews that spoke Greek, the feast became known as penetkoste, which in Greek means “fiftieth.” The fifty days refers to the timing of the festival – fifty days after the spring celebration of Passover (Lev 23:15-16).

In the Old Testament, the Feast of Weeks, is one of the three major feasts listed in Exodus 23:14-17. The other two feasts are Unleavened Bread and Ingathering. The feast was gauged to happen seven weeks from the day of when the first sheaf was presented from the barley harvest during the Passover celebration (Lev 23:15-21). In the ancient days of Israel, the Feast of Weeks was a harvest festival where baked loaves of bread made with wheat, from the spring harvest, were offered to the Lord as a gift from the first fruits. The day was meant for sacred rest and there was worship with certain prescribed sacrifices (Num 28:26-31).

It became a pilgrim feast in the Deuteromonic Covenant, which required all participants to travel to “the place which the Lord your God will choose” (Dt 16:9-12). This would eventually become Jerusalem. There they would celebrate the sacred rites. To this day, Jerusalem is still a city of pilgrimage (just like Rome).

Now that we have a better understanding of the biblical history of Pentecost, let’s focus on the third person of the Holy Trinity – The Holy Spirit. The Holy Spirit, as I said above, was promised in numerous places, with numerous names, in the Gospels (Lk 12:12; Jn 14:16, Jn 14:26, Jn 15:26, and Jn 20:22). Jesus promised that he would send the Counselor and the Advocate to give them all that he taught and shared with them.

The Second Vatican Council document, Ad Gentes (Decree on the Church’s Missionary Activity) says this about the Holy Spirit and Pentecost –

“On the day of Pentecost, however, he came down on the disciples that he might remain with them forever; on that day the Church was openly displayed to the crowds and the spread of the Gospel among the nations, through preaching, was begun. Finally, on that day was foreshadowed the union of all people in the catholicity of the faith by means of the Church of the New Alliance, a Church which speaks every language, understands and embraces all tongues in charity, and thus overcomes the dispersion of Babel.”

The Holy Spirit is a gift to the Church who continues to guide and direct the Church even today. The mission of Jesus and God the Father is in union with the Holy Spirit. The Holy Trinity is united as three persons and one God. A simple way to understand the Holy Trinity is through water and it’s three forms – liquid, ice, and steam – they are all water (one nature), but three separate entities (persons). 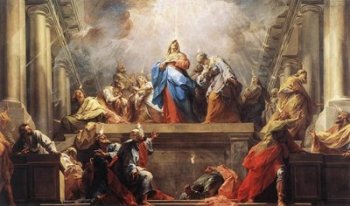 Now that we have an understanding of the Holy Spirit, let’s turn to what Catechism of the Catholic Church states on the topic –

From the beginning to the end of time, whenever God sends his Son, he always sends his Spirit: their mission is conjoined and inseparable. [#743]

In the fullness of time the Holy Spirit completes in Mary all the preparations for Christ’s coming among the People of God. By the action of the Holy Spirit in her, the Father gives the world Emmanuel “God-with-us” (Mt 1:23). [#744]

By his Death and his Resurrection, Jesus is constituted in glory as Lord and Christ (cf. Acts 2:36). From his fullness, he poured out the Holy Spirit on the apostles and the Church. [#746]

The Holy Spirit, whom Christ the head pours out on his members, builds, animates, and sanctifies the Church. She is the sacrament of the Holy Trinity’s communion with men. [#747]

I would suggest reading paragraphs 683-741 in the Catechism as well. Pope St. John Paul II was one of the pope’s that wrote an entire encyclical on Holy Spirit. It’s titled Dominum et Vivificantem (On the Holy Spirit in the Life of the Church and the World). He also left us a series of Catechesis on the Holy Spirit.

I would also suggest reading some of my other blog posts from the past on Pentecost – ‘Mary and Pentecost’, 5 Quotes from Pope St. John Paul II on Pentecost, Mary is the Church on Pentecost, Pentecost, Playing with Fire, and the New Evangelization, and Reflections on the Pentecost Readings.

As we celebrate the great Solemnity of Pentecost, let us joyfully proclaim with fire in our souls…Come Holy Spirit!