“Mondays with Mary” – Mary in the Old Testament: Among the “Poor of Yahweh” (Part 6)

After a couple of weeks focusing on other Marian topics, I want to turn my gaze back onto Mary in the Old Testament and focus on the Marian liturgical symbol – Among the “Poor of Yahweh”. Today’s blog post coincides perfectly with Saturday’s Solemnity of the Annunciation.

According to the Second Vatican Council document, Lumen Gentium, “She [Mary] stands out among the humble and the poor of the Lord, who confidently await and receive from him their salvation” (#55). Here the Council Fathers, with biblical recollection, focus on the “anawim” of God. They are considered the truest of the “poor of Yahweh” – the God-fearing and humble children of God who trust in the Lord to save them from the oppression of men. From these “anawim” come the poorest of the poor – the “remnant of Israel”, who will now form the chosen people of God. This chosen people will be lead by Christ and His Church on pilgrimage to the Kingdom of heaven.

Being the “handmaid of the Lord”, we know that the Blessed Virgin Mary is shown to us as being of a poor disposition. In her song of praise, the Magnificat, Mary includes herself in the humble and poor of the Lord – “he has looked upon the low estate of his handmaiden” (Lk 1:48) and “he has lifted up the lowly” (Lk 1:52). 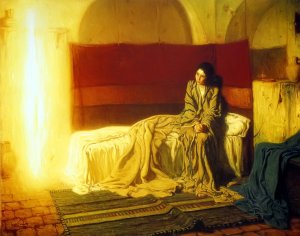 Focusing on these words from the Sacred Scriptures, in the Encyclical Redemptoris Mater, Pope St. John Paul II, focuses on and asserts that the Blessed Virgin Mary was undoubtedly saturated in the “poor of Yahweh.” In paragraph 37, John Paul II says,

“The Church’s love of preference for the poor is wonderfully inscribed in Mary’s Magnificat. The God of the Covenant, celebrated in the exultation of her spirit by the Virgin of Nazareth, is also he who “has cast down the mighty from their thrones, and lifted up the lowly, …filled the hungry with good things, sent the rich away empty, …scattered the proud-hearted…and his mercy is from age to age on those who fear him.” Mary is deeply imbued with the spirit of the “poor of Yahweh,” who in the prayer of the Psalms awaited from God their salvation, placing all their trust in him (cf. Pss. 25; 31; 35; 55). Mary truly proclaims the coming of the “Messiah of the poor” (cf. Is. 11:4; 61:1). Drawing from Mary’s heart, from the depth of her faith expressed in the words of the Magnificat, the Church renews ever more effectively in herself the awareness that the truth about God who saves, the truth about God who is the source of every gift, cannot be separated from the manifestation of his love of preference for the poor and humble, that love which, celebrated in the Magnificat, is later expressed in the words and works of Jesus.

The Church is thus aware-and at the present time this awareness is particularly vivid-not only that these two elements of the message contained in the Magnificat cannot be separated, but also that there is a duty to safeguard carefully the importance of “the poor” and of “the option in favor of the poor” in the word of the living God. These are matters and questions intimately connected with the Christian meaning of freedom and liberation. “Mary is totally dependent upon God and completely directed towards him, and at the side of her Son, she is the most perfect image of freedom and of the liberation of humanity and of the universe. It is to her as Mother and Model that the Church must look in order to understand in its completeness the meaning of her own mission.”

As we commemorate the fourth week of Lent, the fourth Sunday in Lent – Laetare Sunday, let us rejoice with the Heavenly Jerusalem that the Blessed Virgin Mary gives us hope, even in her poor disposition, that she is with us always and ready to lead us closer to her son and our Savior, Jesus Christ.