Remembering what Memorial Day is all about

Today here in the United States of America, we commemorate Memorial Day – the day we remember all those who gave their lives defending our freedom while serving in our armed forces. In the FoxNews article, SEAL who shot bin Laden: Don’t wish me a happy Memorial Day, the author says,

Memorial Day is a time for reflection, pause, remembrance and thanksgiving for patriots who gave up their own lives to protect the lives and freedom of us all – including the freedom of generations long gone and generations yet unborn. We owe the fallen a debt so enormous that it can never be repaid. Memorial Day is a time to honor the lives of those who would rather die than take a knee when our national anthem is played. But they will fight and die for the rights of those who kneel.

For me, today is a little more real than in years past since I have gotten to know some real good men and women at my parish who have served in our military. I have also started to support a company, while drinking coffee, that was founded by a veteran and employs many veterans. This company is known as Black Rifle Coffee Company. If you drink coffee and want to support our veterans, I would encourage you to check out this growing company. The video below is produced by them, and titled – Never Forgotten. 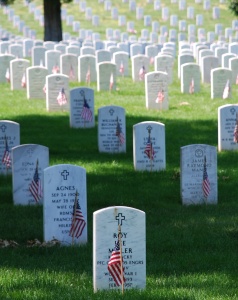 Ever since writing an article back on this day in 2013, every time I see a military veteran (usually wearing a hat or shirt saying when or where they served) or a current active service member of any branch of the military, I go up to them, shake their hand, and say Thank you for serving our country. At first this was hard to do, but I once I did it a few times, it became easier. I think we all need to do this for those who have served or currently serve in the armed forces. We have the freedoms we do because brave men and women decided to put their lives on the line and defend this country. This day and everyday, let us pray for all of the military men and women who have died defending our country.

As we watch the military movies that are playing on television today, grilling burgers and dogs, drinking a beer, and enjoying this day off, just remember Why you have this day off and to offer up a prayer to those who have fallen and have died for us. Today is only possibly through the service and actions of our fellow citizens who have chosen to serve, fight, and defend our country.

If you are looking for specific military prayers, you will find them on this website. Ask for the intercession of St. Michael the Archangel, St. Joan of Arc, and St. George – the Patron Saints of Military Personnel.

And, make sure you watch this short video from Black Rifle Coffee Company –